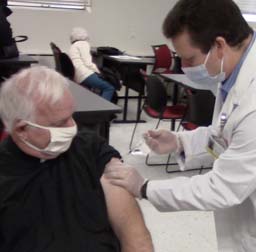 Before I share my adventures with the Covid Vaccine, as a public service let me recommend the practice of cutting the straps on masks before discarding them. Birds and other wildlife are getting caught in disposed masks and we can save the life of animals by this one simple step.

Speaking of saving lives, the Covid Vaccine has so much promise as we strive to get past this horrid pandemic. Over a recent four week period I did funerals for four more people who died from the virus – none of them had been vaccinated and there are now four more families who have an aching hole in their hearts. Not a day goes by that they don’t wish they had their loved ones back.

It’s because I’ve been dealing with Covid deaths that I was anxious to get vaccinated myself. I felt such relief when I received my second shot. Not only did I feel safer than I have in a year, but I could get back to doing what I’ve had to defer for so long – visiting people who sought prayers for their own recovery.

Of course over those months I was praying for anyone who asked me to. But my own doctor cautioned me against physically visiting patients in hospitals, homebound elderly, or ill people in their homes. I could have caught the virus from them or carried the virus to them. Now that I’m fully vaccinated, I feel free to being more fully engaged in ministering to the people I care so much about.

My family’s reaction has been interesting. Some thanked me for taking the step to be vaccinated – they had been so concerned about me and this gave them peace of mind. Knowing this, I would have gotten vaccinated for that reason alone. I’m happy that they don’t have to worry about me every day – and it makes getting together with family members so much less anxious. I was able to be with my 91-year old aunt for the first time in a year. What an indescribably joy!

But a couple of family members thought I was wrong for getting vaccinated. “Don’t you know you’re being a guinea pig for the big pharmaceutical companies?” one asked. Actually that’s not how I think. But even if that was somehow true, I would be happy to be part of a trial that would help others in the long run. I’ve never been a position where I’ve been challenged to give up my life for another person, but if getting vaccinated is my way of giving so others can live, then it’s the least I can do.

One relative has been caught up in politics. He thinks that there is a liberal plot to convince conservatives not to get vaccinated so that they’ll get sick and die and so there’ll be fewer conservatives to vote in the next election. And he points to the national surveys that say that many conservatives are refusing to get vaccinated and so the “plot” is working. All I can do is shake my head about this and other disturbing theories that have no connection to keeping me and my family safe.

This reminds me of what I learned about Jonas Salk and the 1950’s polio vaccine. At the time that vaccine was being distributed to prevent the terrible disease of polio, the influential writer and broadcaster Walter Winchell announced on his April 4, 1954 radio program, “I will report on a new polio vaccine claimed to be a polio cure. It may be a killer.” It caused a wave of fear of the vaccine to cross the country and it took an effort to assure people that the new vaccine saved lives, not killed people. And it’s comforting to note that the local middle school in Levittown is named for Dr. Salk, not Mr. Winchell. (Polio has mostly been eradicated. There are still a few cases of people with polio in some remote parts of the world where people are more distrusting of the vaccine than they are afraid of the disease.)

I can sympathize with people who are afraid to get vaccinated. But I believe the cure for the fear is good information. I asked my nay-saying relatives if they had spoken with their personal physicians about their fears. They had not. They wouldn’t tell me why not. I hope they will. Then they can choose to get vaccinated or not based on what is best for them.

I continue to hope and pray that those four funerals are indeed the last I’ll ever need to do because of the Coronavirus and that we’ll all do whatever we can to be safe.

—Father Ralph Sommer is the pastor of St. Bernard’s Church in Levittown and is an Anton Media Group columnist