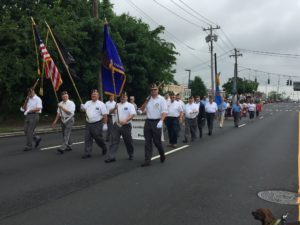 The annual Levittown Memorial Day Parade will be returning on Monday May 31. Due to COVID, the parade was cancelled in 2020. The parade kicks off promptly at 10 a.m. from Island Trees Middle School on Wantagh Avenue. The Parade runs 1 ¾ miles along Hempstead Turnpike and ends at the viewing stand on Shelter Lane near the Levittown Library.

We are in the process of finalizing the Grand Marshall for this year’s parade. The parade will be led by members of American Legion Post 1711 and the Veterans of Foreign War Post 9592 of Levittown. It will feature over many marchers. There will be bands from the Levittown and Island Trees School districts, local politicians, classic cars, all Levittown Civic Groups, Various Sports Clubs, the Boy Scouts & Girl Scouts, the Levittown Fire Department, and the Wantagh/Levittown Ambulance Corps. Immediately following the parade, the American Legion and VFW would like to invite attendees back to their respective Posts for a Memorial Day Service (COVID protocols will be in enforced).

If you would like more information regarding the Parade or have a group that would like to participate contact the American Legion Post 1711 Past Commander and Parade Organizer Henry To at 516-603-7025. Hope to see you there.