The bowling program has been highly successful since its inception four years ago, with the girls team earning its fourth consecutive conference championship and ranking first overall in Nassau County. The boys team won its third straight conference title and ranked third in the county.

Both were undefeated in their respective seasons. Coach Berto Cerasi said much of the core remains from when the program started, and other talented bowlers have joined along the way.

“I love every aspect of it,” said senior Andrew Leahy, who averaged a 203 this year
and had the high game in the county at 265. “The team has great people and they are always there for you.”

Marissa Mele and Paige Donovan had the highest averages in the county at 193 and were separated from each other by only a fraction of a point.

Mele, a four-year member of the team, will bowl for Sacred Heart University while Hailey Galison, who averaged 168 this year, is committed to both bowling and field hockey at St. Thomas Aquinas College.

“Everyone is invested in everyone else’s success,” Donovan said about a team culture that is centered on supporting each other and learning from one another.

The cheerleading squad won its fourth consecutive county championship in Division II Large Team and has gone undefeated during that time. At the county competition, Seaford had the highest score among teams from all divisions.

They advanced to the state tournament and placed second – the best finish in team history – followed by a fourth-place finish at the national competition in Orlando, also its best-ever showing.

“They are extremely dedicated, they work hard and put in countless amounts of hours,” coach Lisa Ferrari said of her cheerleaders.

The Seaford team has five stunt groups for performances which must operate in sync to maximize their score.

Cheerleaders Kelsey Gil and Jordan Gilbert said there is one chance to impress the judges and any mistake could cost them points, so it is important for them to work well together and trust each other.

Samantha Cella added that putting together a routine requires a month of trial and error to get it right. The wrestling team had 10 All-County athletes and had county finalists in nine of 15 weight classes.

Senior Tom Lynch and junior Jake Murphy competed in the state wrestling tournament. Lynch, whose season record was 32-8, was a county champion in the 138-pound weight class to earn his first-ever trip to states.

Murphy became the first wrestler from Nassau County to earn selection into the Division II state tournament as a wildcard since the two-division format was instituted in 2004.

This was his third trip to states, tied for the most in Seaford history, following county championships the previous two seasons. Wrestling at 126 pounds, he finished the season
31-5 and will come back next year with a chance to set the school record.

“We had a real solid lineup in each weight class,” Coach Dave Takseraas said.

The boys track team, under the direction of coaches Cristina Capasso and Kimberly Cooke, won its fourth consecutive conference championship and finished second in the county.

Linzer placed second in the 3,200-meter race, the equivalent of two miles, and also received a sportsmanship award which is only given to one male and one female from each
of the state’s 11 sections. He has been to the state championship 10 times for cross county, winter track and spring track.

Munro, who placed second in the county in the high jump and first at the state qualifiers,
competed at the state level as a freshman with spring track, and this year added invites for
cross country and winter track.

The tournaments are very competitive not only because they feature the top athletes from public and private schools across New York state, but because there are so many students statewide who compete in track and field events.

Seaford alone has approximately 80 athletes between the boys and girls teams.

“It was exciting to have the two athletes complete in states because the winter meet
is hard to qualify for,” coach Cooke said.

-Submitted by the Seaford School District 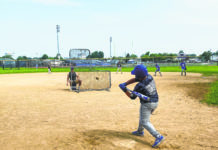 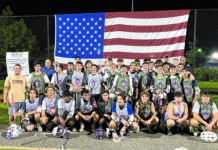 MacArthur Gives Back At Shootout For Soldiers 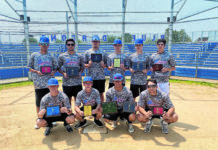