America’s largest town has a fresh slate of elected officials.

Supervisor Donald X. Clavin, who takes over the helm at the Town of Hempstead, was all smiles on the morning of Tuesday, Jan. 7, even while stumbling over the oath as he participated in the official swearing in ceremony.

Holding the Bible was his sister, the Honorable Virginia Clavin-Higgins, a local judge. The siblings were surrounded by Clavin’s wife, Nancy Ann, and their two daughters, Margaret and Catherine.

“What a tremendous honor,” Clavin, a Republican who served as the town’s receiver of taxes for 18 years, said at the ceremony. “It’s something special. This is government by the people and for the people, and that’s something I pledge to everyone here. It’s time to govern.”

The Town of Hempstead 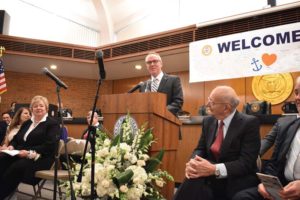 ’s new board started their work on Jan. 1, but the public inauguration ceremony didn’t take place until Jan. 7 at the Nathan L. H. Bennett Pavilion in front of a packed crowd, featuring dozens of local politicians and their families. Clavin defeated incumbent Democrat Laura Gillen by about 1,650 votes. Gillen didn’t concede until all of the absentee and affidavit ballots were counted two weeks after the November election took place.

“There’s a lot going on and a lot of opportunities,” Clavin said. “Having to govern is working with your colleagues. It’s an opportunity to look at how the government is functioning and change it in the Town of Hempstead.”

Town Clerk Kate Murray, who hails from Levittown, took to the podium and swore in for the position once again. She praised Joseph Cairo Jr., the chairman of the Nassau County Republican Committee, for convincing her to make a return to politics. 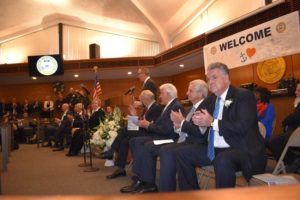 ng my decision to run for Hempstead town clerk with Chairman Cairo, I couldn’t help but notice there was a framed photo of the most beloved football coach in history, Green Bay Packers coach Vince Lombardi, hanging on the wall of his office,” Murray said. “It captured my competitive nature and my desire to work for the big, diverse Town of Hempstead family. It’s great to be home.”

Receiver of Taxes Jeanine Driscoll also took part in the swearing in ceremony. She defeated Democrat Chandra Ortiz, 79,631 votes to 70,864. Now, she takes over the seat Clavin held for so long.

“I hope everyone received their tax bill yesterday,” she joked. “It went out pretty early this time.”

Councilman Dennis Dunne Sr. led the Pledge of Allegiance to kick off the ceremony, while Christopher Macchio sang the National Anthem to the packed room.

Rabbi Mordechai Kamenetzky, the head of the Yeshiva of South Shore, conducted a moving invocation for the crowd. At one point, during Kamenetzky’s speech, he made plenty of people in the crowd tear up while addressing the recent rise in anti-Semitic crimes across New York.

Lieutenant Governor Kathy Hochul also addressed the Town of Hempstead board. The Buffalo native gave Clavin some advice about leading a local government, as well as the rest of the local elected officials.

“This is in your DNA,” Hochul told Clavin. “It’s not for everybody. There’s no greater opportunity to serve your fellow man. Find places where there’s harmony. Elections occur, but on a day like today, we begin to govern and we do it together. I come here with a friendship from Governor [Andrew] Cuomo and our administration.”

“I want to congratulate Don Clavin,” King, who is retiring at the end of this term, said. “He’s dedicated, hard-working and he really knows what’s going on. He’s immensely involved in the community. Work hard and be the greatest supervisor in America.”