The MacArthur Generals were marching on the field against the Mepham Pirates, ready to go to war. The girls varsity soccer squad fought the Pirates at Cold Spring Harbor High School in early November, determined to capture the Nassau County Class A championship.

“Our starting 11 girls, at the beginning of the year, didn’t play much,” head coach Jamie San Filippo, a former coach for the SUNY Old Westbury men’s soccer team, said. “A lot of people really stepped up to lead this team.”

The Generals defeated the Pirates 3-0 in dominating fashion, capturing their first county championship since 2011.

MacArthur went 14-2-2 on the year. Kara DeBlaiso, one of the squad’s four captains, led the team with 24 goals on the year, elevating the Generals from 13-4-1 a year ago. That season, MacArthur lost the county title to Valley Stream South, 2-0.

Goalie Shannon Killian was stout throughout the county title battle, shutting down the Pirates with eight saves. 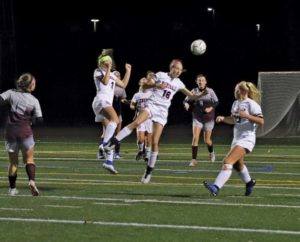 Eighth-grader Hailey Metzger, who was called up from the junior varsity team midway into the season, became a prolific scorer right away for the Generals. She rose to the occasion against Mepham, scoring less than two minutes after Hailey Hnis put the Generals on the scoreboard. Amanda Cannella topped off the scoring by knocking in a second-half goal off a penalty kick.

“I enjoyed watching them be so happy and joyful while winning the county title,” San Filippo, who came back to MacArthur to coach the girls team four years ago, said.

San Filippo was methodical in his approach this year, telling the team to take the season game-by-game. First, they needed to win the Conference AB2. From there, they could advance throughout the county playoffs.

But facing South Side in the semifinals, the Generals faced quite the challenge. South Side knocked MacArthur out of the playoffs in 2016 and 2017, and it was time for redemption. The Generals won 3-2 en route to the finals. 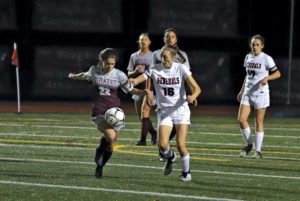 As San Filippo says goodbye to eight girls who he’s coached for four years, he can truly say he “put MacArthur back on the map.”

“I couldn’t be any more proud of what they’ve done for this program,” he said. “They set the bar very high. Every year, we’ve gone one step further. Hopefully, next year, it’s one step farther and winning the Long Island championship.”

Previously, San Filippo coached the boys team for eight years, followed by a six-year stint at Old Westbury. The advantage of previously being a college coach, he said, is being able to communicate with players and parents alike about the college scene. But this is not his first title.

Now, the Generals can relax and celebrate before preparing for another successful campaign a year from now.