The message is spreading. The dangers of vaping continue to be told across the nation, warning vulnerable teenagers about what can happen to them should they start smoking e-cigarettes.

A new report last week released by U.S. health officials said more than 2,200 people have been confirmed with respiratory illnesses due to vaping. In total, 47 people have died from the mysterious illness that has doctors wondering how to save lives.

The Centers for Disease Control and Prevention (CDC) found vitamin E acetate in the lung samples of 29 patients who have been to the hospital because of e-cigarette habits. Nationally, there is a push to make vaping products illegal, specifically, flavored ones that usually entice teenagers and college students.

President Donald Trump led a discussion about the increased use of vaping products at the White House on Nov. 22, featuring medical professionals, parenting groups and industry experts, including anti-tobacco and vaping activists. While industry experts are against banning the flavored products due to their high sales, everyone at the meeting did agree that the age to purchase vaping products should increase from 18 years old to 21.

On the local level, the Levittown Community Action Coalition (LCAC), in coordination with the Youth Environmental Services (YES) Community Counseling Center, are attempting to warn people about the dangers of vaping. After the coalition cooked up the idea of making stickers about the dangers of vaping, Councilman Dennis Dunne Sr. found a way to not only make it happen, but to get the entire area involved.

“We were going to put them on pizza boxes so moms and dads, when they pick up pizza boxes, can say, ‘Oh my gosh. I can’t leave a party because I’ll go to jail since they’re drinking,’” Dunne said, referring to stickers created near the Bellmore-Merrick Central High School District to promote awareness for the social host law. “I said, ‘we should do this for vaping.’ I said, let me just do it myself.”

So Dunne went to the Minuteman Press in Levittown, run by Michael Levy. The councilman asked Levy how many stickers could he get for $500. The answer: 5,000.
But what would Dunne and the coalition do with 5,000 stickers?

“I went to every pizza place in Levittown, Island Trees, East Meadow and the West Village Green in Levittown, plus parts of Hicksville,” Dunne said.

The stickers are now on pizza boxes throughout the area. They feature a clear message, which reads, “Vape warning: Vape products contain nicotine. Nicotine is an addictive chemical. Vaping can be hazardous to your health.” The first pair of sentences are quoted from the U.S. Food and Drug Administration, while the third is from U.S. Surgeon General Dr. Jerome Adams.

And thus far, Dunne’s sticker initiative has been a welcome sight for many pizza parlor owners. 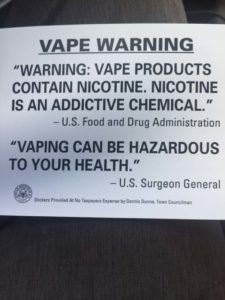 “Not one pizza place said no,” he said. “Every one of them agreed to it.”

The only issue Dunne ran into was when he handed the stickers over to an unidentified pizza shop owner, a customer raised concerns about a business across the street, which is a vape shop. The owner, however, reportedly responded by saying, “It’s the kids’ health I’m worried about.”

“This is a stepping stone into the worst drugs,” Dunne said. “The nicotine in it is so strong and powerful. It’s much more powerful than I was a kid. It causes popcorn lungs. People are dying from vapes and it’s scary. I started doing this in June, and I still give them out. It’s so important that we do this. This could lead to marijuana and heavier drugs. It’s step-by-step.”

When Dunne brought samples of the stickers to the LCAC meeting on Nov. 13, the reaction was exceptional. Positive feedback was received from the entire coalition, and Levittowners are doing what they can to save lives.