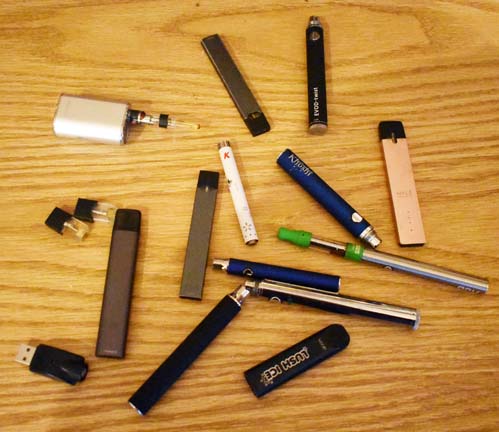 I’ve been taking a casual poll among teens that goes like this: “I don’t know if you know it, but there have been a lot of stories in the news lately about how vaping is making a lot of kids sick. I’m wondering if these stories are affecting the kids you know who are vaping, or if they make no difference.” The almost universal response is: (a) “Father Ralph, we don’t watch the news.” and (b) The kids who vape are still vaping.

In my casual conversation about vaping with adults, I commonly hear this: “Why is the government going after vaping when they still allow more dangerous things like smoking?”

So for any readers who don’t know what this issue is about, let me put it this way: Supposed that ten years ago you heard that there was a new invention about the size of a pack of gum that could deliver as much nicotine as a full pack of cigarettes. These devices would heat liquid nicotine into an vapor that the user inhales. And besides nicotine, these devices, called “e-cigarettes” will contain ultrafine particles that can be inhaled deep into the lungs, including flavorants such as diacetyl (a chemical linked to serious lung disease), volatile organic compounds , heavy metals, such as nickel, tin, and lead.

The good news is that these e-cigarettes won’t pollute any air outside the lungs because all that will be given off is water vapor. The rest of us won’t have to breathe in second-hand smoke. The bad news is that the legal (but harmful) nicotine ingredients in the e-cigarettes can be replaced with other more harmful and addictive substances (such as marijuana or other drugs) and go unregulated. People can buy these adulterated e-cigarettes from the internet or even in their neighborhood from dealers who are “doctoring” the ingredients. One doesn’t know what is being inhaled.

Furthermore, suppose ten years ago it was suggested that these devices could be made attractive to kids by flavoring the vapes with flavors such as bubble gum, banana split, and fruit loops. This way young people who might never pick up the smoking habit can now be addicted to nicotine in a new way.

I suspect that ten years ago most people would have said, “Are you nuts? Why would it be OK to allow a new harmful product on the market, especially made attractive to kids.” But the e-cigarette WAS developed — and at first marketed to smokers as a way to help them quit smoking. It’s said that the chemicals inhaled through vaping are less harmful than those inhaled in cigarette smoke.

If e-cigarettes were valuable smoking cessation devices, it probably would have been more appropriate to then have them prescribed by doctors as such, thus limiting their use to those actually trying to quit smoking. But doctors are discovering more and more that “less harmful” doesn’t mean “not harmful” so I doubt that physicians would want to be part of the sale of e-cigarettes.

So when people ask, “Why is the government going after the sale of e-cigarettes and their marketing to children instead of going after the more dangerous smoking?” it’s because they are trying to regulate something new before it becomes an accepted part of the culture. (Remember when the government banned alcohol sales? And how did that work out?) The government is trying to eliminate cigarette smoking with warnings, educational campaigns, and perhaps by taxing it out of existence. But in the meantime, there is a concern that the industry behind vaping is trying to make the e-cigarette mainstream instead of as an aide to those who are quitting smoking. There is therefore an effort to stop the widespread use of e-cigarettes before they become the new normal.