Homecoming football and Levittown are a perfect combination to officially mark the start of autumn. And this year was no different.

General Douglas MacArthur High School took over, both on and off the field, come Sept. 27’s homecoming game against Valley Stream Central High School. The crisp air on a beautiful Friday evening was certainly the perfect scenario for the Generals’ varsity football squad.

The team, led by head coach Robert Fehrenbach, dominated from the get go. Joe Manfredo, the team’s quarterback, got the Generals going with a one-yard sneak for a score in the first quarter, the first of two such plays for him on the night.

Hugh Kelleher broke down Valley Stream Central’s defense throughout the evening, rushing for 116 yards, the third straight game he’s rushed for more than 100 yards. He ran into the end zone twice in the second quarter, giving him a total of five touchdowns in three games thus far into the season.

“Being that it’s homecoming, there usually is a large crowd, which is a great benefit for us,” Fehrenbach said. “I’m just glad that we gave them something to cheer about, and our players fed off that energy as well.”

The Generals’ defense was just as strong as their offense, only allowing the Eagles to gain 132 yards. Colin Muller had a pair of interceptions to break down Eagles quarterback Jordan McCray.

Off the field, the homecoming events surrounding the game were just as fun.
Through the first three games of the 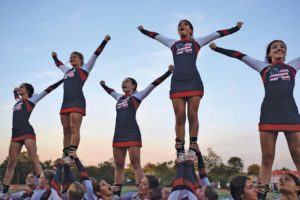 year, MacArthur has outscored its opponents 82 to 10.

The annual celebration kicked off with a parade. It started on Gardiners Avenue and continued down North Jerusalem Avenue, led by the high school band and featuring the Jonas E. Salk Middle School band, cheerleaders, student organization representatives, the homecoming court and administrators from the Levittown Public Schools.

The evening game commenced with a moment of silence and dedication of the evening’s festivities to Lorenzo Fernandez, a student who passed away in 2014.

Senior football players, cheerleaders and members of the kickline, marching band and color guard were then introduced during the pregame ceremony, with each student escorted across the field by a parent.

The 2019 homecoming king and queen, Christopher Flick and Olivia Esposito, were

announced and crowned by former king and queen, Joe Gagnon and Jennifer Gattus.

The halftime show showcased the marching band, a group of exceptional students who performed a classic rock theme, under the direction of Joe Romano. There were also performances by the varsity cheerleading team and MacEttes kickline team. The community continued to pack the bleachers and cheer on the Generals in what became a great victory for the squad, which is now 3-0 to start the season.

The Generals are considered a threat for the Conference II title this year, entering the year as the No. 2 seed. The squad hasn’t had a losing season since 2007.

Curran Reveals Plans On Releasing Inmates As Ferretti Fires Back