Old fans of Eddie Money might remember him from the long hair and wild performances. His behavior—on and off the stage—was questionable at best.

His silky, wavy brown hair, coupled with a deep raspy voice, made him one of the most unique rock stars of the 1970s and 1980s.

But newer followers of the famed musician can’t forget about his amazing GEICO commercials less than a decade ago. Seriously, no one can get “Eddie Money Travel” out of their minds.

Unfortunately, he died on Sept. 13 at the age of 70 following a brief battle with stage IV esophageal cancer.

However, the department has a strict policy: No one can have long hair. That was strictly against Money’s moral code. The long, brown hair was part of his look.

Money, who graduated from Island Trees in 1967, headed back to his alma mater in 2010, when Bulldogs nation inducted him into their Music Hall of Fame.

“I used to perform his music in my college rock band,” Greg Warnokowski, Island Trees High School’s band director, said. “I had the pleasure of meeting Eddie when he did a benefit concert in our auditorium. It was a wonderful homecoming for him.”

In the days after his death, Warnokowski noticed something beautiful.

“I saw some of the students looking at his plaques after hearing about his passing,” he said. “He was a rock legend, and his memory will surely live on through his music.”

Money departed for Berkeley, CA within a year of graduating from Island Trees. He would joke about how broke he was, studying with the legendary Judy Davis.

Within a decade, Money was taking over clubs w 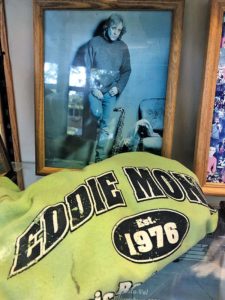 ithin San Francisco. By 1977, he signed a contract with Columbia Records to produce his original music. That’s when “Two Tickets to Paradise” was born.

From there, his career soared. But his personal life was in turmoil.

Money frequently struggled with alcohol and drug abuse. Just three years after his hit song made him a national icon, he overdosed on a drug he originally believed was cocaine. Due to the severity and side-effects of the overdose, he had a permanent limp in his left leg.
Come 2001, Money’s personal issues continued. He signed up for a 12-step program and within two years, he claimed to be sober.

As his personal life settled, he made sure to pay homage to his Levittown roots.

“I became really good friends with the Rascals,” Money said in a December 2014 interview with Anton Media Group’s Dave Gil de Rubio. “Felix [Cavaliere] and I are really close now. I told him I grew up singing like him singings songs, like ‘Mustang Sally’ and ‘Come On Up,’ songs like that which were only big on Long Island. Songs like ‘Ain’t Gonna Eat Out My Heart.’ And Felix is a sweetheart of a guy. And I’d see Felix up there and Eddie Brigati spinning two tambourines. And where did I see them? At MacArthur High School. I didn’t see them at Madison Square Garden.”

Money’s health declined dramatically since July, when he had surgery for heart valve issues. During his stay in the hospital, he contracted pneumonia. By the end of August, he let the world know about his stage IV esophageal cancer, which “has a poor overall prognosis and is frequently diagnosed at a late stage,” according to a 2017 study published in the Clinical Endoscopy journal.

He will be remembered for his charitable efforts, specifically with the Intrepid Fallen Heroes Fund. Money partnered with the organization in 2011, creating the song “One More Soldier Coming Home” to pay homage to the men and women who perished while serving our nation.

When Money was in town for the Two Tickets to Paradise musical, he made sure part of it is about those who gave the ultimate sacrifice.

“I want to do something for them,” Money said in the 2014 interview. “The last time we did the play, we had the one facility in San Antonio and they had the capabilities of having all the stuff they needed with the computers, but nobody was paying for the connection. What the f*ck is that all about? And creating “One More Soldier Coming Home.”

Now, his memory lives on as one of the most successful people to walk through the halls at Island Trees.

“It is a sad day for the Island Trees School District to hear about the passing of one of our most famous graduates,” Warnokowski said. “Eddie was an inspiration to our students, especially former music student Jesse Kinch, who became a well-known singer, songwriter and guitarist. Eddie had Jesse perform as his warm-up act at one of the local shows he was headlining when Jesse was only in ninth grade. He even casted Kinch to play ‘young Eddie Money’ in a play written about his life.”