Katlin San Filippo developed a passion for helping others since she was a toddler. Her father, Jim, founded the Levittown Soccer Stars in 2000.

The Soccer Stars are part of the Levittown Soccer Club. But this team is specifically designed to enable kids with disabilities, who normally couldn’t play on a squad. Now, they have a chance to play with a group.

San Filippo has been the head coach of the Soccer Stars since 2013, and has grown the program exponentially. The team meets each Sunday during the fall, and looks to expand into spring of 2020 for the first time. From 10:30 to 11:30 a.m., kids 5 years old and older can join the club, which plays at MacArthur High School’s field. 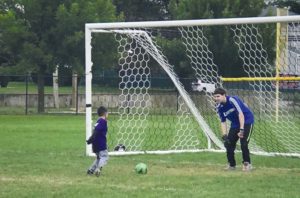 The Tribune spoke with San Filippo, who discusses what the Soccer Stars are all about, how one can become a volunteer (a “buddy”) and more.

Q: How did you get involved with this program?
A: My dad is actually the president of the soccer club, so he created the program. I started out as a buddy and played with the kids. I just helped out as a buddy and the coach was stepping away. It got to the point where there was no coach anymore and I didn’t want the program to fall apart. I stepped in and took over.

Q: What’s the journey been like for you?
A: It’s been awesome. I started with four kids. We would meet for an hour every Sunday to kick the ball back and forth. I would keep them as interested as I could. With four people, there’s not much you can do. Through social media and contacts I have with the school districts, I have about 20 kids who are going to be coming down. Over the last few years, I’ve definitely grown the program. It’s just been so awesome.

Q: What does it mean to you to know you’ve grown this program?
A: It means everything. I have such a passion to work with these kids. Everyone deserves to have an opportunity to play, whether it’s mainstream or some other way. It’s very reward to see them on the soccer field to see them do something I’m passionate about. I get to pay it forward and give back to them. 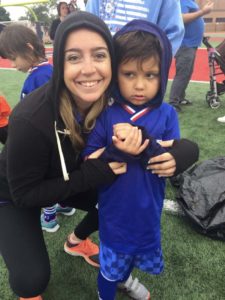 Q: What’s it like to see these kids play and let them know they can be like everyone else?
A: It’s the best feeling in the world. Growing up, I never had someone tell me, ‘No, you can’t play on this team.’ Not that anyone is saying that to them, but this gives them a space to do that. Maybe they just want to stand in the net and try to stop the ball when someone kicks it at them. If that’s what they want to do, they can do that. On a mainstream team, it’s more structured and you have to take turns at different positions. Anyone can do whatever they want.

Q: What is the best part about this for not only you, but them as well?
A: For everyone, it gets them out there and moving, especially since we live in a world of technology. I love to get them out on the field and do some type of physical activity, which can help them health-wise and everything else.

Q: Where do you see this program going moving forward?
A: Moving forward, I’m always hoping to get more players and buddies. I have my own personal goal of being like other clubs that do tournaments and we haven’t ventured into that. I definitely want to venture into going to tournaments as a team with those with the same type of program. I want Levittown to have a Soccer Stars tournament, too. 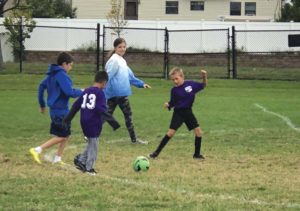 Q: For people who want to get involved or want their kids to be part of the Soccer Stars, how can they sign up?
A: I usually have them send me an email and I talk them through it. But anyone can go on www.levittownsoccerclub.com. The program is free of charge. You just need to select the Soccer Stars option and it walks you through the rest of it. They can also contact me through soccerstars@levittownsoccerclub.org or at 516-965-9850.