Four Levittown natives enjoyed skateboarding together down to Jones Beach when they were kids.

Last weekend, Devin Votta and the Reilly brothers—Sean, James and Steven—put a purpose to their passion. The team, which named themselves Ride 4 Life: Carving 4 A Cause (R4L), longboarded from New Hyde Park to Montauk, aiming to raise $5,000 for Survivors Facing Forward, a program at Cohen Children’s Medical Center that supports survivors of childhood and adolescent cancers. The team ended up raising $6,600.

“A part of the reason we do such a rigorous and intensive ride is to symbolize what people battling cancer go through each day,” Votta, 24, said.

Votta noted that “nothing compares” to this experience at the end of the day.

The quartet took part in a similar event last summer to pay homage to loved ones they lost to cancer: The Reilly brothers’ uncle and two grandfathers, as well as Votta’s grandfather, Daniel Huggard, who died in April 2017, two weeks after being diagnosed with leukemia. Busy playing lacrosse at college upstate, Votta couldn’t fly down to Florida to say goodbye.

Before moving to Vero Beach, Huggard, a father of eight, hosted large family dinners every Sunday, which Votta fondly remembers. When Votta was in the seventh grade, Huggard bought him a shamrock medallion that he still wears (though he’s replaced the chain a few times). 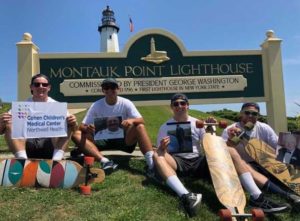 “He was an unbelievable role model for me,” Votta said. “He was always willing to do something for others. He worked three jobs, was an army veteran. He was all about family, never took anything for granted, was a man of God. When I was little, I used to think he was a saint.”

Votta’s grandfather often attended mass at a Brooklyn church. Nearby, he’d frequently encounter a homeless man. Huggard would take this man out to breakfast once or twice a month at a local diner, Votta explained.

“My grandfather helped the man get back on his feet,” Votta said. “He helped him change his mindset in life.”

And, in this same spirit of positivity, Votta sees R4L as the perfect way to honor Huggard’s passing.

Similarly, Sean Reilly, 27, shared advice from his late grandfather that he summoned during the trip.

“Our grandfather taught us that the word ‘quit’ doesn’t belong in our vocabulary,” Reilly said. “No matter how tired we were or how much we wanted to stop, we all just kept going. Pediatric cancer survivors are only kids, and they already know this lesson.”

On Saturday, Aug. 3., the team departed from Cohen Children’s Medical Center, a division of Northwell Health, at 5:30 a.m., longboarding 67 miles via Sunrise Highway to Quogue, where they spent the night. After getting a pre-planned lift to Riverhead to avoid a route issue, they schlepped another 54 miles to Montauk Point Light, arriving there at 1:15 p.m. on Sunday. They made friends at different stops along the way, Reilly said, explaining the special mission of celebrating the lives of those battling and have battled cancer.

Additionally, the Reilly brothers and he plan for R4L to become a nonprofit organization.

This would allow R4L to collaborate with like-minded schools and businesses through longboarding, which Votta believes unites people from all backgrounds.
But Votta may soon have to retire the board he used for the 121-mile trip, which he bought in the eighth grade.

In the future, Votta hopes that R4L will help tackle other global issues besides cancer, such as ocean pollution.

“The world is bigger than ourselves,” Votta said. “Skateboarding represents that because you get to connect with your surroundings and be free out there on your board. Open your heart. It doesn’t necessarily have to be on your skateboard. Hop on your bike, put on your rollerblades, get your running shoes on and together, we carve, we can ride and we can run for a greater cause.”