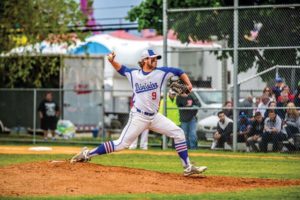 Every little leaguer aims to become a professional. They want to step on the same dirt that baseball’s top stars play on. They strive for the top.

No one from Levittown has ever made it to the MLB. However, one lad wants to change that.

Varela, 22, received a call from a Los Angeles Angels’ scout two days after the MLB Draft in June. While he wasn’t drafted, he knew everything would be OK. It was time to become a minor league pitcher.

The former Division Avenue High School pitcher dominated on the mound at LIU Post. It was virtually impossible for hitters to even make contact while facing the Levittown native.

“LIU was my first college visit and I fell in love with the campus,” Varela said. “It was only 20 minutes away from home, but it felt like I was in the middle of the country.”

Varela did exactly what he did in high school, using his four-pitch repertoire to become arguably the best pitcher in LIU’s history. The right-hander stands at 6’1”, utilizing his stature to increase his velocity.

He’s maxed out at 92 mph, but usually throws his four-seam fastball around 88 mph. His other pitches include a slider, curveball and change-up, with his slider being his most effective tool while facing batters.

“It’s my go-to for strikes and strike-outs,” he said. “It’s not a big, sweeping slider. It has a small break, but I throw it relatively hard compared to my fastball velocity. We’re just going to keep sticking to it.”

Since signing with the Angels as a non-drafted free agent on June 11, Varela hasn’t stopped traveling.

The former Division II star has already bounced around from the Arizona League (Arizona League Angels) to the Rookie League (Orem Owlz), low Single-A (Burlington Bees) and high Single-A (Inland Empire 66ers). While the schedule might be hectic, the experience of already having a shot at high Single-A ball is quite exceptional.

“I was told I would make an appearance in Single-A for one day and go back to Orem,” he said. “I got back to Orem, spent two weeks there and then, I was told I’m going to high-A in Southern California. It’s been a crazy month and a half.”

The possibility of being Levittown’s first major leaguer is certainly alive and well for Varela.

While he still needs to prove himself to coaches and scouts alike, the tenacity and leadership skills that he learned at Division Avenue and LIU will lead him down the right path.

“James is the epitome of the Division baseball player,” Division Avenue varsity baseball coach Tom Tuttle said in a statement. “This is evident in his hard work and dedication to his craft. The Levittown community is proud of James’ accomplishments and wish him the best of luck on his journey in professional baseball.”

Sean Nolin from Seaford, just south of Levittown, is the only notable player from the area to make it to the big leagues. He played in eight major league games from 2013-15 with the Toronto Blue Jays (two) and Oakland Athletics (six).

For Varela, his journey in baseball started when he was a toddler.

“I started playing baseball with my mom (Kerri) since I was first able to walk,” he said. “My grandpa always watched baseball and I would always sit down on the couch with him when I was a little kid and watch. I’ve always loved it.”

Varela would frequently play games at Red Wing Field. He remembers those days like it was yesterday. Suddenly, here is a 22-year-old who is now on the cusp of making Levittown history.

While he knew he wanted to be a baseball player, he was unsure what position he would play. At Division Avenue, he was the starting center fielder, as well as a pitching ace.

“I was never a power hitter,” Varela said. “I was old school and always put the ball in play, which probably led to me becoming a pitcher. Pitching, at first, it was just talent since I could throw hard. But by my junior year, I knew pitching would take me to college.”

Varela began to execute his pitches more diligently than ever. It’s what made NCAA scouts realize how talented the Blue Dragon was. He was focused on his goal, and nothing would get in his way.

At LIU, head coach Mike Gaffney and pitching coach JP Lipovac aimed to improve Varela’s craft. He had the basics, but in order to get a shot at professional ball, he needed to be spotless.

“JP introduced me to a bunch of things on Twitter,” Varela said. “It led to my knowledge of baseball and more specifically, pitch design. Besides him, my head coach played minor league baseball, so I could talk to him about things that guys at the higher levels do. If I can do things they do, it should show at the college level.”

Fortunately for Varela, the Angels called and now, he has a chance to do something special. It’s all about staying focused and working to improve each day.