After four years at Island Trees High School, the institution’s senior class are ready for the next stage of their lives.

On June 28, Island Trees held its commencement ceremony at the school’s football field. Among those who addressed the crowded field were Superintendent Dr. Charles Murphy, as well as Principal Nicholas Grande. 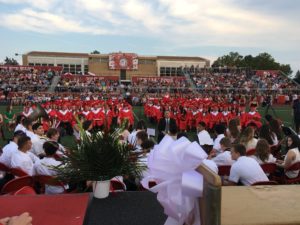 The valedictorian from Island Trees was David Wendt, a notable student who has stood out in science, math, technology and engineering (STEM) programs throughout his high school career. The school’s salutatorian was Abel Marhajan, one of the most active and accomplished members of the community.

Among the highlights for Island Trees in 2019 include being named as a “recognition school” by the New York State Department of Education for high achievement and performance under the Every Student Succeeds Act (ESSA).

The school will see some change during the 2019-20 academic year, with Alice Levy, Joseph Manna, Deborah Nieves and Carol Siegel each retiring.