Imagine being so powerful at the plate that your school needs to build a fence for you. That was the case for Division Avenue High School softball star Daniella Roselli.
Roselli, a captain on the team, knocked 32 dingers out of the park throughout her four-year career, the most in Blue Dragon history.

“​Daniella Roselli is the type of player every coach dreams of coaching one day,” coaches Dave Radtke and Mike Verdi said in a joint statement. “She’s resilient, strong, humble and extremely passionate about her abilities and the game. Her respect for her teammates, her school, the game and most importantly, herself, is truly special.”

The Blue Dragons advanced deep into the playoffs, qualifying for the Nassau Class A championship at Hofstra University. However, they fell to Wellington C. Mepham High School, 10-2, ending the year second in the county. 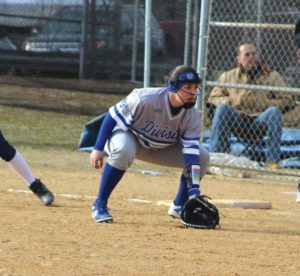 The team’s success is largely thanks to Roselli, who was named All-County honorable mention in her freshman year, before being added to the All-County team for each of the next three seasons.

“It’s my work ethic,” Roselli said of her keys to success. “Off the field, I try my hardest to keep getting better, even when we don’t have practice. During games, I’m pumping everyone up and being a leader on the field. I was captain during my junior and senior years.”

Roselli dominated at the plate. Her ability to launch the ball right off the bat was unlike any other in school history. Among her highlights are two major walk-off hits during her senior year.

One of them was against Seaford High School. In a tight battle, Roselli hit a grand slam in the eighth inning. But Seaford came back, only to lose to Division Avenue thanks to yet another massive hit by Roselli: A walk-off double to end the game.

The other was against crosstown rival MacArthur High School, giving Division its first win against the Generals in quite some time.

“I felt like I was a big part of the team,” she said. “I had a huge amount of respect from my coaches, knowing I can help lead the team with them. I’m always positive and into the game.”

Roselli is off to Adelphi University, where she’ll play on the women’s softball team, all while studying speech pathology. She’ll play first base and third base there, though, she also played second base and shortstop in high school.

Her willingness to swap positions, and learn while doing so, will certainly pay off at the NCAA level.