Mulcahy’s Pub and Concert Hall in Wantagh was the place to be on May 30. The Wantagh bar was packed as locals gathered around to raise money for Nassau County Police Officer John Carney.

Carney is suffering from Lyme Disease and the complications that come with it. Further, he is facing even more adversity with Mast Cell Syndrome, a rare condition in which a person can experience different types of anaphylaxis, like hives, swelling and other issues.

The Greater Long Island Running Club (GLRC) and David Lerner Associates are making sure they do whatever they can to help Carney, who’s been battling these issues for three years. Dozens of people came together at Mulcahy’s for a fundraiser, with the GLRC and Lerner presenting a check for $2,500 to Carney and his family.

“Besides his police service, Don is a Marine and has been to Afghanistan on multiple deployments,” Congressman Peter King, who represents the Second District, said on Facebook after attending the event. “These Carney guys are the real deal, as is their father, a retired FDNY veteran.”

Carney is currently receiving treatment in Florida, where he’ll be for the next three or so months. His family is by his side, as he aims to fight the ultimate battle. Over the course of his fight with Lyme Disease, he’s suffered from dramatic weight loss, extreme fatigue and abdominal pain.

The treatment is not covered by insurance, so the fundraiser will certainly help this family as they attempt to make Carney as comfortable as possible. Like many who have the disease, various doctors and hospitals failed to properly diagnose him.

“I have never seen so many people and such depth of emotion in Mulcahy’s, with everyone hoping and praying for John’s speedy and full recovery,” King said. “It was a great feeling just to be there among all these good people. This outpouring must give tremendous inspiration and good feeling to all the Carneys, especially John.”

This is certainly not the first time Mulcahy’s has played host to a fundraiser, either. In late January, hundreds of people gathered at the pub to honor the life and legacy of the late Staff Sergeant James McNaughton. McNaughton was the first New York City police officer to die on-duty during the war in Iraq.

For those who want to help cover Carney’s medical costs, they can contact the Nassau County PBA at 516-294-6230. 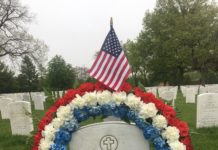