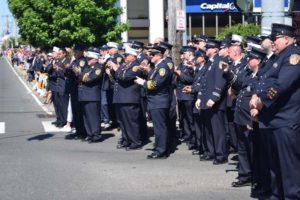 On May 27, America once again observed Memorial Day. This is the day we all should pause and remember those citizens who have answered the nation’s call and, while in service to their country, paid the ultimate price for freedom and liberty.

After the Civil War, towns around the country began holding springtime tributes to the soldiers and those who had fallen in the Civil War. They did this by visiting the cemeteries, decorating the graves, gathering with family members and listening to poems or speeches.

On May 5, 1868, General John A Logan, commander-in-chief of the Grand Army of the Republic, a Civil War Union veterans organization, called for a national day of remembrance, known as Decoration Day. He recommended that the observation of this day of remembrance be held on May 30, a date without connection to any significant battle fought during the Civil War.

By 1890, each northern state had made Decoration Day an official holiday. At the turn of the 20th century, Decoration Day would begin to be referred to as Memorial Day. After World War I, this day of remembrance would also be recognized by the states in the south.
It wasn’t until after the “war to end all wars” that all military dead from the United States, regardless of conflict, would be remembered on Memorial Day. In 1971, as a result of an act of Congress, the observance of Memorial Day would now fall on the last Monday in May.

Towns across the United States honored our deceased military in much the same way as they did in the late 1860s, with parades, visits to cemeteries, family gatherings or in prayerful silence. Levittown, as per tradition, observed this solemn occasion by holding its annual parade and memorial ceremony. The parade was led by the town’s veterans in a heartwarming day of events.

At the conclusion of the parade, a memorial ceremony took place in Veterans Memorial Park, with various veterans, governmental, fraternal, civic, religious, educational and patriotic organizations, along with the residents of Levittown, gathering to remember those in the military who gave up all of their tomorrows so we could enjoy ours.

Though, we will remember all of our nation’s military who have passed on, it will be those members who called Levittown home or attended one of the three Levittown high schools who we will remember the most. Together, Levittown will always remember 41 of its finest citizens (average age of 21) who gave their lives in service to their country.

Levittown will remember that 35 of them died in combat and five died in accidents while on military duty.

Most importantly, Levittown will remember that all of them were sons, brothers, fathers, husbands, classmates and friends, who sacrificed their own hopes and dreams for us.

On Memorial Day, now and in the future, try to attend an event and join your community in pausing to remember America’s and Levittown’s best. Take stock in the rights and privileges you enjoy in this free nation because of their sacrifice. Pray for them, thank them and always, remember them.
—Peter Stasinski is the senior vice commander of VFW Post 9592.