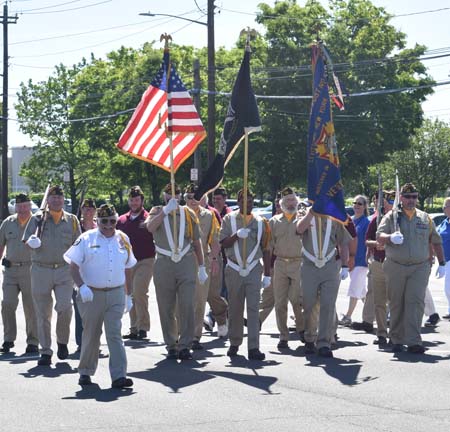 I spent one year of my childhood as a Cub Scout and when it was time to move up to the Boy Scouts, I declined — not because I found Scouting unpleasant, but because it held the prospect of camping. I know there are a lot of people who find joy in living outdoors, and I have a fine appreciation for God’s creation, but when it comes to the end of a day I much prefer sleeping in my bed with a solid roof over my head. The thought of sleeping among snakes and tics and mosquitoes and bears, well I’d rather leave that up to the more adventurous among us.

So it is with great appreciation that I contemplate Memorial Day. Our soldiers didn’t have the luxury of deciding where (or even when) to sleep. I can’t even begin to come close to imagining what the experience of the jungles of Vietnam or the mountains of Afghanistan were like. To be surrounded not only by the daily discomfort of a punishing environment but to see the wounding and deaths of fellow soldiers — well I shudder and weep if I think about it too long.

And then I imagine what it is like to die in battle. There was mercy for those who died instantaneously, though I’m horrified to think of what went through them if they saw their deaths coming. But there were too many who were wounded to death. Such suffering is so quickly passed over even in the most graphic war movies.
And to dwell on this thought is too painful to continue for long.

Oh how I long for the day when all wars will cease! I cannot comprehend how, in the 21st century, people can still resort to war to settle differences and to correct injustices.

On Memorial Day we had a chance to reflect on the sacrifices so many men and women made in war. We celebrated with lively music, marching bands, antique cars, kids and grownups wearing all sorts of uniforms carrying all sorts of banners. It was fun and patriotic. It’s always good to see so many residents come out for the parade.

But hidden amidst all the pageantry is the knowledge that we marched that day to honor those who encountered more than snakes and tics and mosquitoes as they camped in the woods. Perhaps we could call it “festive sadness” as we think not only of those who died but their families and friends who suffered and continue to suffer the loss of so many vibrant lives that otherwise would have fortified our world.

While we might feel helpless to stop the wars that take place overseas, we do have a chance in the shadow of this Memorial Day to stop destructive wars we might be engaged in. Let’s make peace in our families, among our co-workers and in our neighborhood. These local “wars” are not without casualties and our prayers for world peace can start by choosing peace and reconciliation right where we live.