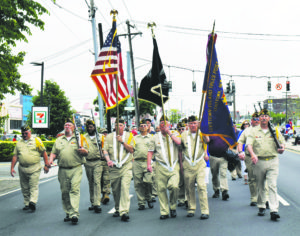 As Levittown prepares for next week’s Memorial Day Parade, VFW Post 9592 has all the information spectators need prior to the event.
The Levittown Memorial Day Parade starts at Island Trees Middle School on Wantagh Avenue and Hempstead Turnpike. The parade steps off at 10 a.m. The parade marches west on Hempstead Turnpike from Wantagh Ave to Shelter Lane. At Shelter Lane, it turns left and passes in front of the viewing stand, which is situated across from Levittown Veterans Memorial Park.
Once the parade ends, there is a brief ceremony at the park where the flags are raised, Taps is played and the VFW fires off a three-round volley. After the ceremony, the VFW and American Legion each go to there respective post for an additional ceremonies. The VFW reads all the names of all those who lost their lives and were from Levittown. They also do a flag raising, taps, three-round volley and place a wreath in front of the marque.