The fundraiser, which started in 2013, has been a significant yearly event at MacArthur High School and to the Levittown community overall. This year, it attracted Nassau County PBA President James McDermott to ensure his organization is involved with the cause.

“Growing up in this community, I’ve seen what the program has been doing for the past seven years and it’s had an incredible impact,” McDermott, a MacArthur High School alum, said. “It’s a great day for [the PBA] to get involved and give back to the community.”

The PBA donated funds to the snack stand during last year’s fundraiser to allow those proceeds to benefit the event’s efforts, which aims to raise money and awareness for autism spectrum disorder (ASD). The disorder affects one in 59 children, according to Autism Speaks.

Along with a $2,000 donation check, the Nassau County PBA brought a jumbotron truck to the game, where both McDermott and MacArthur varsity boys lacrosse coach John Nessler spoke on the event and the cause it supports. 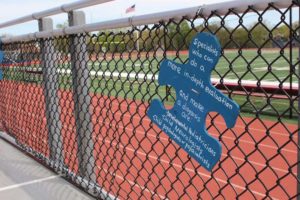 Nessler thanked the PBA, along with the rest of the community, especially Joseph Gallagher, whose son Brendan has autism and is a great inspiration for all involved. The family has been assisting with the rallies since the start of the program.

“We’re just very thankful to have the support to be able to do the things we’re doing,” Nessler said. “You talk to anyone on the street and mention some of these MacArthur kids, they’re just absolutely amazing kids.”

Along with the PBA donation check, raffle baskets were auctioned off at halftime during the boys varsity game to raise money for the event.

Proceeds from the fundraiser benefit the Hagedorn Little Village School, which provides special education services to many students in the Levittown Public Schools district.

After a press briefing prior to the event, the junior varsity and varsity boys lacrosse players unloaded large plywood signs, themed with the puzzle-piece pattern associated with Autism Awareness Month, from Gallagher’s van. From there, they began to decorate the fences around the turf. 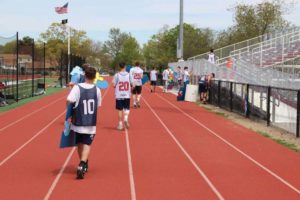 Chris Gartelman, a senior on the MacArthur Generals, discussed the impact that this fundraiser has on the team and the school.

“And the team, we all love it here, we try to help out every second that we can. And for the school, everyone shows up on Saturday. We all want to be here.”

A heart-warming moment for parents and players occurred in the early afternoon, where MacArthur lacrosse players joined the PAL Knights, a lacrosse team for children with special needs, in a handful of games and drills.

Smiles were wide among participants and spectators, and the teams then joined in a huddle to hear the words, “Today, we are all Knights and today, we are all Generals,” before breaking the huddle together.

The day kicked off with the MacArthur varsity girls lacrosse team’s 10-9 triumph over Carey High School, running all the way to the pinnacle event—the boys game between crosstown-rivals MacArthur and Division Avenue High School.

Regardless of the on-field spectacles, there were plenty of opportunities to see everyone from children, players and parents coming together for the cause.

Like many other community members, McDermott hopes to see this fundraiser continue to grow.

“I saw how the program helped kids like Brendan years ago, and how it triggered something special in this school,” he said. “We want that to continue.”

—Phillip Downes is a Levittown native and the managing editor for the Albany Student Press at the University at Albany.