Talent is in the air, and so is creativity.

The Heckscher Museum in Huntington is giving teenagers a chance to showcase their art work close up on a local level. For the 23rd year in a row, the museum is hosting Long Island’s Best Young Artists, a hallmark exhibition for Long Island high schoolers.

“Long Island’s Best connects the experience of viewing art in the museum to the making of it,” guest juror Robyn Cooper, an artist and adjunct professor of art at Adelphi University, said. “Students get the opportunity to fully immerse themselves in the creative process from the initial conceptualization of an idea through executing it. At the end, students emerge with a deep appreciation for the arts, and a prestigious exhibition. They will have taken an artistic journey.”

Four students from the Levittown Public Schools were named to Long Island’s Best Young Artists, with only 80 of 359 entries being displayed.

“I am constantly amazed at the talents displayed by our students,” Levittown Public Schools Superintendent Dr. Tonie McDonald said. “Our student-artists are very creative, and I congratulate them on their outstanding accomplishment.”

“I was inspired by Vicente Hernández’s Abur! Señores y hasta la vista and the images of escapism that it presents. In particular, the dramatic, luminous sky caught my attention as it immediately provoked a sense of hope and transcendence in me,” Fuchs, whose work is titled Fantastical Escape, said in her summary. “Under the stress of my everyday life and pursuit for success, I, too, find a need for an escape. As opposed to the dirigible depicted in Hernández’s painting, I used meditation to represent my release from the schoolwork-induced stress that many high school students like me experience.”

Fuchs, a junior at Division Avenue, used oil on a canvas to create her painting. Each of the Division Avenue students worked with art teacher Tim Ryan to perfect their submissions.

“Upon entering the Rivera and Beyond exhibit, I was immediately drawn to the vibrant style and unusual texture of Alfredo Sosabravo’s work, specifically Personaje con Pescado,” Connors, also a junior, said. “Although there was no description of the meaning behind this piece, I interpreted it as the fish being on the person’s mind, both literally and figuratively.” 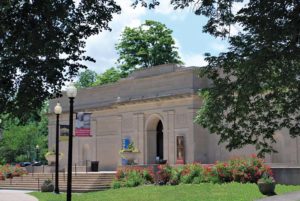 Zhang, a sophomore at Division Avenue, also created her submission using oil on a canvas.

“Guillermo Meza’s oil painting Nemesis caught my attention due to the contrast between the dark background and the white indigenous cloak,” Zhang said. “As the museum educator who was guiding us explained the meaning behind the painting, I became more captivated by its connotation. In the original painting, the figure wore a white cloak soiled with red, which reminded me of youth and innocence becoming tainted by being exposed to something bad.”

MacArthur’s Steinberg worked with art teacher Lynn Spinnato on her submission. Entitled Surgical Building/Bedroom, her work is made from ceramic.

“Paul Mele’s photograph of a room in the abandoned Kings Park Psychiatric Center sparks feelings of loneliness and confinement in its viewers,” Steinberg said. “If you look deeper into it, however, you might see the light leaking through the window as a glimmer of hope in the distance. It reminds me of a chance at freedom from the captivity of the dark and dreary environment of the asylum.”

Each of the works will be on display at the museum until May 19.