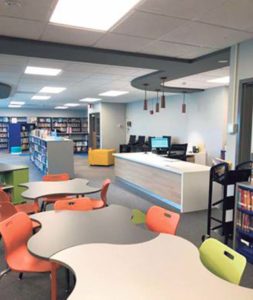 The 1950s furniture is no more. Computers no longer rest on makeshift bookshelves. Everything is brand new.

As part of a series of changes within the Island Trees School District, the Michael F. Stokes Elementary School’s library renovation project is finally complete.

The refurbished library is one of multiple stages from the district’s $50.7 million capital projects referendum, which was voted on in March of 2016. With the change comes a fresh look for one of Levittown’s two major school districts.

“Now that the library is finished, it was certainly worth the wait,” Island Trees Superintendent Charles Murphy said. “It is beautiful and befitting of what our students deserve. It is truly the centerpiece of the school.”

The new Stokes library features open space for future needs, increasing the square-footage by about double the size. The space is equipped with 21st century technology and is accessible to more students than ever, the district said. It meets the district’s plan to acquire new technology and it can also be adapted based on future needs.

“There was an issue with the initial library floor and we waited a few months extra until the project was completed to our satisfaction,” Murphy said. “The newly renovated Stokes library has been constructed for the next 50 years.”

The bathrooms at Stokes Elementary have fresh toilets and urinals, colorful tiles on the walls to replace the old teal ones, additional sinks and new hand dryers.

“After 60-plus years of student use, it was just time to renovate our schools,” Murphy said. “Our bathrooms, doors, locker rooms, libraries and bleachers, for example, were all from the original post-World War II construction and housing boom. Since that time, we’ve had multiple of generations of students use our facilities.”

In the summer of 2018, the Island Trees School District began Phase III of the capital projects initiative, which included $16 million worth of improvements, such as each of the libraries. Parents were told work to the district’s school buildings would occur during the school year, but the district would make sure it would “operate as smoothly as possible.” In order to make sure students would not be distracted by the work being done, the contractors worked nights.

Murphy concluded by saying, “I can tell you that very few people have home bathrooms that can last 60 years.”