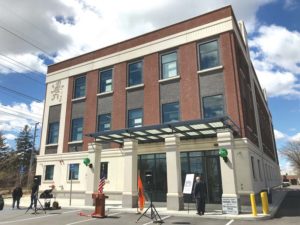 “We’re here to announce the official re-opening of the Eighth Precinct,” Nassau County Executive Laura Curran said at a ribbon cutting ceremony. “As we’ve said before, community policing is in our DNA. It’s part of the brand and our strength of the police department. We continue to have historic crime lows.”

The Eighth Precinct, which initially closed so the county could save money, is now fully operating once again. It will serve the communities of Levittown, Bethpage, Farmingdale and Plainview, adding staff and services to enhance Nassau County’s community policing initiative. Curran noted that the county will add the widely praised problem-oriented policing deployment (POP) cop to the Eighth Precinct command. This proven program assigns officers to work closely with community leaders, business owners and residents.

“We’re almost home,” Nassau County Police Commissioner Patrick Ryder said. “It’s like a family that got split up years ago. The last part is to get the detective division back, fully staffed, where they should be. We’re working very hard with the county executive and unions to make sure we can make that happen.”

Since the precinct shut its doors in 2012, Ryder said the Nassau County Police Department “continued to assign the same personnel to patrol posts, and crime in both areas has declined to historic lows due to the dedication and hard work of our department member.”

The re-opening of the Eighth Precinct, though, didn’t come without controversy.

Curran filed a lawsuit against the county legislature in November over changes the group made to her proposed $3.075 billion budget. The legislature added $1.6 million to the budget, with money allocated to re-open the Eighth Precinct, as well as the Sixth Precinct in Manhasset. The county executive’s office argued that the county was not financially ready to reverse the consolidation of the two precincts, saying it was “irresponsible.”

Eventually, the back-and-forth chaos between Curran and the legislature came to an end, as they reached a deal to re-open the two precincts.

“I’m confident in saying we can all agree that this decision is not just for the benefit for residents of the 15th legislative district, but for residents of all Nassau County,” Ferretti said at the press conference. “For all of the officers who are coming back to the Eighth Precinct, who have been gone for all too long, welcome home.”

Politics aside, the precinct is indeed open.

The multi-floor facility includes state-of-the-art technology, Ryder said. An extensive tour of the refurbished Eighth Precinct included views of wire-tapping rooms, which will be in full force under court order during maximum security events, such as the 2019 PGA Championship at the Bethpage Black Golf Course. It also has the capacity for 20 detectives, who will each have a different expertise.

Among the many capabilities of the Eighth Precinct are a summons room at the rear of the building, accident-aided case reports that can be taken in the front desk, a brand-new lineup room and ones for processing as well. The precinct also includes multiple interview rooms, which are soundproof and videotaped at all times, so police can interview potential subjects or victims in privacy. The new prison cell area inside of the precinct was designed by New York Department of Corrections.

“The Detective Division is currently 48 detectives short of the budgeted number of 360, and for the past two years we have voiced our concerns about public safety issues to the County Executive and nothing has been done,” Nassau County Detectives Association President John Wighaus said at the opening of the Sixth Precinct.

Curran noted that Nassau County is currently in negotiations to fill the void of detectives. Ryder is hopeful that will be solved soon.

The most important thing, though, is the citizens of Levittown and its surrounding areas can feel safer thanks to the re-opening of the Eighth Precinct.