The Bethpage-based nonprofit set out to create the longest line ever recorded of hunger-relief packages. More than likely, they did just that.

“Thanks to our friends at PSEG Long Island, we not only likely broke a world record, but we were able to highlight the issue of childhood hunger on Long Island,” Randi Shubin Dresner, president and CEO of Island Harvest, said. “Nassau and Suffolk counties are home to some of the wealthiest ZIP codes in the country, and there is simply no reason for any child here on Long Island, or across the U.S., should go without something as basic as food.”

One Bellmore resident, Robert Stamoulis, knew he had to join this special project. The PSEG Long Island employee knew it was the perfect time to lend a hand. 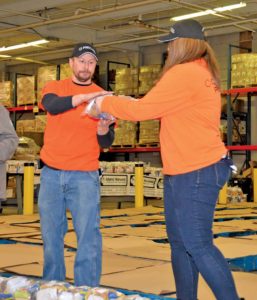 The PSEG Long Island volunteers and the group from Island Harvest placed 1,805 packages on pallets throughout Island Harvest’s Hauppauge collection and distribution center. Once the packages were fully placed, it measured to 1,164-feet in length, going around the entire warehouse.

But it wasn’t an easy task. Each of the packages needed to touch one another. After placing them on the ground, volunteers couldn’t touch them or pick them up.

Each moment had to be recorded in order for it to count. In total, it took three hours to place the 1,805 packages.

Until now, the current record had been 1,000 packages.

Guiness World Record will let Island Harvest know if it set the record or not at some point in April. A judge was on-site to make sure everything was being done by the book.

“I am so proud of our partnership with Island Harvest, and our employee volunteers who help this organization pack food in its warehouses throughout the year,” Daniel Eichhorn, president and COO of PSEG Long Island and an Island Harvest board member, said. “We are hopeful that this attempt to break the record will be deemed a success. Either way, the people of Long Island win because of the vital services Island Harvest provides to Long Islanders every day.”

Each of the packages that were used during this attempt were used for Island Harvest’s Kids Weekend Backpack Feeding Program, providing supplemental food support for school children who rely on their school’s breakfast and lunch programs, but often don’t have enough to eat over the weekend.