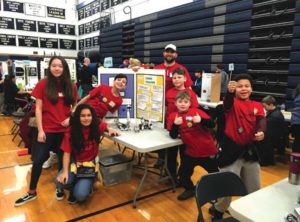 In the wee hours of the morning on Feb. 2, the Island Trees Jr. Robodawgs, led by Mr. Groneman and Mr. Norton, loaded themselves onto a bus to head over to Huntington High School along with Mrs. Hamelburg, school chaperone. The team would be competing against other Lego League teams from across Long Island. Island Trees fielded three teams for this great competition.

Each team was required to design, build and program a robot using Lego Mindstorms computers and parts. Each robot had to be programmed to complete various challenges on a game board without the direct assistance of its human creators—not an easy task.

Additionally, each team was required to attempt to solve a real-world problem related to this year’s theme, “Into Orbit.” Students from fifth to eighth grade worked together to brainstorm potential problems faced by humans during long-distance space travel, like how to keep the air clean, what to do if you get sick and how to maintain a healthy mental state. The students then formulated a solution to that problem. The team even reached out to people working in the space industry to share their thinking. Finally, teams were judged on how they worked together as a group, how they conducted themselves at the competition and how they lived up to the Lego League “core values.”

This event was the culmination of months of daily practice and hard work by the students and a great time was had by all. Although the teams won’t be moving on to the regional competition, each student had the opportunity to exercise their curiosity, creativity and ingenuity in a fun, competitive environment.

—Submitted by the United Teachers of Island Trees