Congressmembers Tom Suozzi and Kathleen Rice were at the New York Terminal Radar Approach Control facility in Westbury on Jan. 14 to discuss the government shutdown’s impact on local workers.

Two hundred and sixty-five air traffic controllers and other employees at the Federal Aviation Administration facility have been working without pay since the government shut down on Dec. 22.

TRACON, located at 1515 Stewart Ave., is one of the busiest air traffic control divisions in the nation. Controllers are responsible for guiding and monitoring air traffic coming and going from Kennedy, LaGuardia, Newark Liberty and other regional airports, including MacArthur Airport in Ronkonkoma and Republic Airport in Farmingdale.

“This shutdown is having a negative impact on the morale of these employees and federal workers across the country,” Suozzi (D-Glen Cove) said. “The government needs to reopen effectively and immediately.”

He added that the facility was one of the best-run air traffic control systems in the world and that having employees worried about their jobs and when they would receive their next paycheck was a major distraction to them.

“This is just one example of critically important services impacted across the country,” said Suozzi, stressing that the three factors impacting federal employees as a result of the shutdown were financial, job training and outside contracting services.
Kevin Maney, president of the Air Traffic Controllers Association at NY TRACON, said that 140 workers at the facility were being affected by the shutdown.

“We have controllers working 10-hour days, six days a week, handling aircraft landing at one of the most critical places in the world,” Maney said. “This government shutdown is an unnecessary distraction.”

He said that controllers and related staff at the TRACON facility missed their first paycheck on Jan. 11 as a result of the shutdown.

“Bills need to be paid and families need to be taken care of,” Maney said.
Rice (D-Garden City) said putting a halt to the shutdown would be in the best interest of many of these workers.

Rice said, “They are responsible for keeping millions of passengers safe every day and its unacceptable that they should have to do this important, high-skilled work without pay.”

Editor’s note: The government shutdown is currently on a three-week hiatus. This article was written during the shutdown. 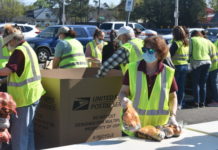