Imagine floating through outer space with a view of Earth few humans have seen. Now, imagine doing that with your feet firmly planted on the ground. Due to the latest advances in virtual reality, we are able to immerse ourselves in worlds we can hardly imagine, much less imagine ourselves experiencing. This emerging technology has attracted attention not only for its innovation and entertainment value, but also for its potential impact on several fields of study, including medicine, education, psychology, engineering, architecture and tourism.

The increasing popularity and importance of virtual reality (VR) have had an effect on public libraries, which strive to reflect shifts in trends, technology and culture. Libraries continue to serve as spaces for reading and research, though they have grown to also include opportunities for community members to experiment with new products, especially those not easily accessible to the public.

For the Levittown Public Library, VR is a welcome addition to its expanding list of cutting edge equipment, which now includes the Vive VR System. According to library director Trina Reed, the decision to venture into the virtual realm was an easy one.

“Virtual reality is a great way to introduce additional STEAM education to our library users of all ages. Through themed VR experiences, users can view images of the Earth as they ‘float’ through a space station or ‘dive’ into the deep sea to learn about marine life, among a world of other options,” said Reed, adding that not only do library staff welcome VR users, but they also hope to inspire local innovators to create content of their own. “I hope the inclusion of VR technology will cause people to want to create virtual technology themselves as well as participate in the action.”

With the aid of a headset, hand controllers and a high-end gaming laptop, users are able to enjoy a 360-degree immersive experiences. Unlike augmented reality, which overlays digital content onto real surroundings, an example being the popular game Pokémon Go, virtual reality creates an entirely simulated experience. Library staff have been eagerly training in order to introduce the public to this exciting new acquisition. While the system is not currently available on an appointment basis, it has and will continue to be available through a variety of library programs.

In April, author/lecturer Clive Young presented Star Trek: Beam Me Up!, a multimedia program that traced the history of Star Trek and included time for attendees to play “ADRIFT,” a survival/adventure VR game set in space. According to Meaghan Barbari of the library’s public relations department, “many patrons were excited to use virtual reality because they had never done it before or because of prior positive experiences they had with VR.”

The enthusiasm of program attendees demonstrated the broad appeal of virtual reality. Barbari noted that one attendee “was [even] more excited than her teenage son,” who also played “ADRIFT.” Jessica Koenig, 55, a Levittown resident and director of the Island Park Public Library, attended Star Trek: Beam Me Up! and called the experience “great” and a “wonderful use of taxpayer money.” While Koenig had long been interested in trying VR, she also worried she would experience a common side effect related to this technology: dizziness. However, the library felt like a “safer environment” and the “fabulous squad of people who [knew] how to use the technology” made the experience so positive that she would “love to do more [VR] activities.”

The Young Adult Department has also seen an interest from local teens. Librarian Christian Mucciarone said the response to their program held during spring break was so enthusiastic that the department held a second session for those teens who were on the waiting list. Teens played The Lab, a STEAM VR game that features several “mini games” they were able to choose from, including the archery-based Longbow, Solar System (users can “move” the planets), and Robot Repair, among others. During the summer, the Young Adult Department plans to offer weekly opportunities for teens to use the VR system in the Teen Room.

It’s safe to say that virtual reality is revolutionizing the way we educate ourselves and others, see the world and perhaps even save lives. The possibilities, especially as programmers and engineers continue to improve this incredible technology, are endless. For now, in our small corner of the world, we can look to the library to help lead the way forward. 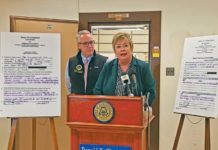