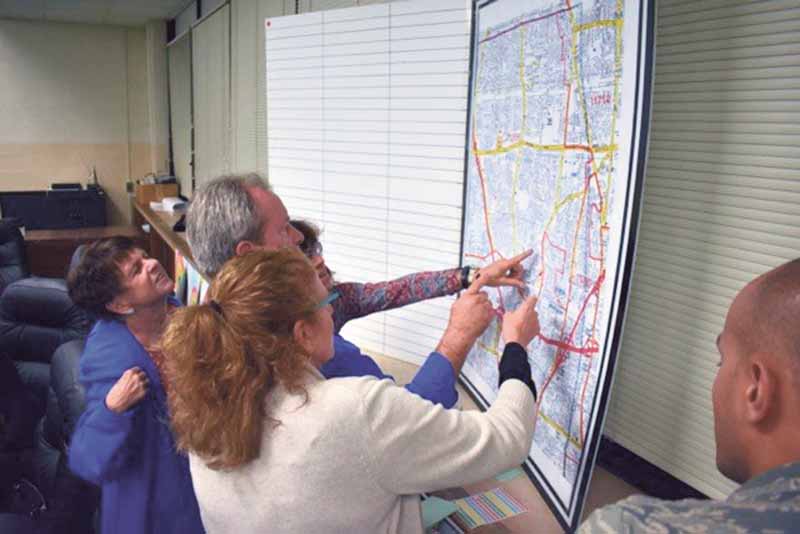 At the latest Levittown Chamber of Commerce meeting, the big topic covered was the drug problem in the community, which has remained an ongoing concern for parents, teachers and local officials and culminated in the creation of the Levittown Community Action Coalition last March.

Nassau County Executive Laura Curran and Matthew Hynes, Senior Advisor of Constituent Affairs from the Office of Town of Hempstead Supervisor Laura Gillen, both spoke at the meeting, as did YES Community Counseling Center Assistant Director Mark Wenzel. A partially complete map of drug hot zones was shown, detailing which areas of the community are deemed to be potential risk areas for drug dealings or usage. At the conclusion of the meeting, chamber members were encouraged to write in to YES Community Counseling Center any drug hot spots yet to be identified on the map.

“Since we’re still in the information gathering phase, what we’ve learned isn’t actionable at the moment,” Father Ralph Sommer, one of the coalition’s most active members, told the Levittown Tribune in a later interview. “But [identifying hot spots] is giving people a chance to reflect on where there are safe areas for our young people, as well as areas of concern.”

Though the coalition has been active for less than a year, it has gained traction as both an educational tool and a way for community members to cope with the negative impact of drugs in their community by channeling their concerns into actions. Sommer opined that the act of meeting with people who represent multiple portions of the community—be it students, parents or teachers—has helped everyone to gain a broader perspective on the issue of drugs.

“Every time I go to a coalition meeting I learn so much from people who are involved in different areas of the community that I don’t ordinarily have direct contact with. I think this is true for all of us, and the benefit of sharing experiences and challenges is that we can support each other in our efforts to develop healthier living in our village,” said Sommer. “The more stakeholders at the table, the more we can work together [towards] a comprehensive and holistic approach to helping people deal with their angers, fears, frustrations, loneliness, etc.”

And while the dangerous substances being used receive much of the attention, Sommer clarified that understanding addiction and the lives of those who struggle with substance abuse is crucial towards solving the community’s drug problem.

“The root of the epidemic is that a good number of people don’t have the personal integration to deal with their life’s hurts and disappointments without medicating themselves in some way,” Sommer said, adding that, while watching loved ones suffer is hard, a little support can go a long way. “I don’t know how measurable this could ever be. We can certainly measure the rate of overdoses, but how can we ever know who we’ve saved from this tragedy because of something we’ve said? The coalition gives me strength to carry on and a solid direction to go in. I think that’s been the benefit so far for many of the members.”

What did you think of this article? Share your thoughts with me by email at: jcatrone@antonmediagroup.com.