The Nassau County Police Department Second Squad arrested four Nassau teens for gang assault and burglary in the first degree. The assault occurred at 3:15 p.m. on Wednesday, Jan. 24 in Levittown.

According to detectives, the four defendants knocked on the front door of a residence on Gardiners Avenue looking for the 19-year-old male victim regarding money. Kevin Chicas, 17, of Levittown, drove all four to the scene. Abdul Muzaffar, 18, of Levittown and Joseph Dimperio, 17, of Mineola stood holding baseball bats. Aiden McCaughey, 18, of Levittown banged on the door and opened the storm door. When the victim opened the interior door he stepped in where a struggle ensued.

McCaughey pulled a knife from his pocket and the victim suffered injuries to three fingers and a laceration on his chest. When the victim’s father arrived, all four defendants fled the scene on foot. Chicas remained on scene and was arrested without incident.

The victim was transported to Nassau University Medical Center where he was treated and released.

Muzaffar, McCaughey and Dimperio were arrested individually over the next two days and were arraigned at the First District Court at 99 Main St., Hempstead. 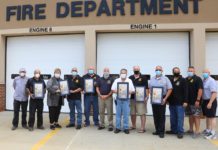