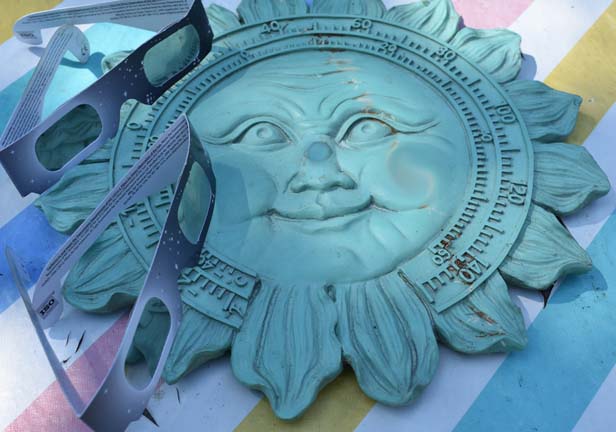 I have a couple of pairs of eclipse glasses in case anyone wants them. Oh wait, last week’s solar eclipse is over. There’s no need for them anymore. While the eclipse was taking place, it was great having the glasses. When I was a boy we didn’t have such glasses. Instead I made a pinhole projector and every 15 minutes I traced the moon’s transit across the sun on a piece of paper. This time it was easier and more amazing as the glasses let me look directly at the sun to see what was going on. I was safe from having my eyes burned by the sun’s rays yet I could still follow the eclipse’s progress.

And now the glasses are useless. They were essential for about two hours, but now they’ll just be souvenirs of a moment in the summer of 2017. Yet there are more than memories generated by the eclipse. Scientists were eager to collect data from the areas of the country where there was a total eclipse so they could observe the corona — the sun’s outer atmosphere of diffuse plasma that extends into the solar system. Normally we can’t see the sun’s atmosphere (just like we can’t really see our atmosphere) especially because the sun itself is so bright. But once the light from the sun is blocked, the corona can be seen (just like we can see our atmosphere at sunset when it glows).

We’ve learned over time that the corona reveals huge loops of plasma that are controlled by the magnetic field of the sun. But since the magnetic fields aren’t stationary in the gaseous sun, from time to time millions of pounds of coronal plasma get ejected out into the solar system toward the earth. Our earth’s magnetic field protects us from the effects of the coronal mass ejections. These can’t be seen with eclipse glasses, but there are instruments that have been designed to detect when the sun is spewing matter and energy toward us.

In this natural order of things I see a metaphor for God’s interaction with us. So often we take the sun for granted and only focus on it at these spectacular and unusual moments. So too, I think that so often we take God’s presence for granted, noticing the divine only at the spectacular moments of our lives. These include the joyful moments (birth of a child, a wedding, a healing) as well as the more difficult moments (death, a frightening diagnosis, natural disasters). There are lesser moments when people call out “Oh my God!” such as a traffic jam or a time when the cat knocks over the vase. But even then, they are rarely actually engaging God in a conversation.

To more closely experience God it is helpful to have the equivalent of eclipse glasses. I suggest that going to church or temple is that equivalent. Being together in a worshipping community helps us to focus on the divine and to “see” more clearly the message God has for us. Just as the sun continually shoots material toward the earth, so too God continually sends messages that guide us comfort us, challenge us, heal us and strengthen us. But people are often oblivious to the ways God loves us through these messages. Coming to church is akin to gathering at the local public library where glasses were given out. People flocked together to see the eclipse. When the “flock” gathers to pray, together we see what God hopes for us. One big difference in this comparison is that an eclipse happens only once in a while. Experiencing church together happens each week. If your attendance at your place of worship is as frequent as the eclipses across America why not take the miracle of last week’s celestial event to come back again? You’ll be amazed at what you can see.

“Get an early and original look at this column and all that the Levittown Tribune offers each week by subscribing here: http://antonnews.com/subscribe “