Another Memorial Day came with threatened showers and so for a second year in a row the school bands were prevented from marching in the Levittown parade. It was disappointing to the many children who had been practicing for weeks. And it took a little luster off this few hours of an American village at its best.

While some neighboring villages cancelled their parades, Levittown marched on. This is the 70th Anniversary of Levittown and we remember our roots as seven decades ago the newly built Levitt houses were populated almost exclusively by veterans of the then recently ended World War II. So whether there was sun or rain, the Levittown Memorial parade was happening.

Hundreds of marchers were greeted by hundreds of spectators who lined much of the route up Hempstead Turnpike. They had brought large umbrellas or tents or they sat in the back of mini-vans with the back hatch opened. American flags were in evidence all along the road and parents encouraged even the littlest toddlers to wave their flags.

The 2015 Census reports that today 6.3 percent of Levittown is populated with veterans (only 327 remaining from World War II, 481 from the Korean War, 984 from the Vietnam War, 125 from the first Gulf War and 114 from the current Gulf War.) So the outpouring of community presence is certainly out of memorial respect for the community’s veteran founders, most of whom have either died or moved away. 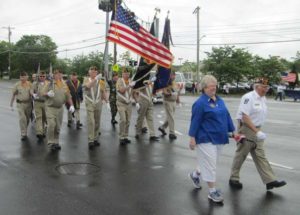 Marching on Memorial Day is an important work that our community does. War is so often glorified in movies and now in video games so our Memorial Day Parade sobers us up to the truth that some who fought never had the blessing of ever returning home. They made a sacrifice that was both noble and terrible. It makes us think not only of the past and what might have been had our soldiers not been killed, but it makes us think of our future and what we can do to work for peace.

Most of us have no direct influence over national policies that send men and women into harm’s way, but we do have influence over the smaller skirmishes that exist between neighbors and within the walls of our own homes. Perhaps the best way to march forth from Memorial Day would to be instruments of peace and reconciliation where ever we can in the days ahead. Rain or shine, this is a noble and necessary thing to do.

“Get an early and original look at this column and all that the Levittown Tribune offers each week by subscribing here: http://antonnews.com/subscribe“