Long Island knows how to kick off a Memorial Day weekend. Ask anyone who has ever attended the annual Bethpage Air Show at Jones Beach, and they will likely tell you that it’s the traditional LI way to usher in the summertime season. Last year’s show had a record-breaking attendance of over 453,000 spectators.

This year’s air show, which was held on May 28 and 29 over the scenic coastline of Jones Beach, saw at least 280,000 attendees since the pre-show on Friday, May 27. Headlining the air show were the United States Air Force Thunderbirds, an aerobatic flight team that featured six F-16 Fighting Falcons. Each Falcon is approximately 19,700 pounds and can travel at speeds up to 1,500 mph. The F-16s, also known as Viper, performed about 40 tactical maneuvers which featured a mix of formation flying and solo routines. The Thunderbirds last appeared in the Bethpage Air Show in 2015, and have performed for over 280 million people in all 50 states, as well as 57 foreign countries.

According to Captain Erik Gonsalves, #8 advance pilot and narrator for the Thunderbirds’ performance, “We use safe and effective precision while flying in diamond formation. The pilots fly three feet apart from each other, and sometimes are within 18 inches of each wingtip. The closing speeds can reach 1000 mph, with accelerations up to 9Gs.” The precision flight team has 130 members, but they travel with 65 regularly. Each Thunderbirds officer serves a two-year tour of duty, and enlisted Thunderbirds serve anywhere from three to four years after they have been hired.

Captain Gonsalves was thrilled to return to the Bethpage Air Show this year. “We’re excited to be back at Jones Beach for Memorial Day Weekend. Coming to places like this, meeting amazing people and doing these shows is what it’s all about.” Since the team’s inception, there have been 325 officers who wear the distinguished emblem, “America’s Ambassadors in Blue,” which symbolizes the selflessness and dedication that is required to perform these incredibly difficult maneuvers. Each Thunderbird team member must have served for a minimum of three years in the U.S. Air Force. Currently, there are 20,000 USAF enlisted personnel deployed world-wide, with 660,000 active reserves.

A show tribute to Fallen Warrior Sgt. Anthony L. Mangano of Long Island was performed by the U.S. Air Force Thunderbirds. Sgt. Mangano was killed in action in 2006 while deployed in Afghanistan. His name was placed on Thunderbird Jet #1, and his family attended the air show as guests of the Thunderbirds.

The United States Army Golden Knights Parachute Team performed for their 13th Bethpage Air Show. SFC Brian Karst, 94E Radio and COMSEC repairer, offered a few words on the team’s return to Long Island’s shoreline. “We start the air show at around 12:15, and we’re the Army’s only official demonstration team. It’s not every day that we can jump onto such a beautiful beach. We’re so thankful to be here, and we’re thankful to be able to honor American veterans this Memorial Day Weekend.”

Also aboard for the air show was Pilot Sean Tucker, who performed with his custom-built Oracle Challenger II biplane, as well as aerobatic pilot Matt Chapman. Lt. Col. John Klatt flew the Jack Links’ Screamin’ Sasquatch Jet Waco, while the SUNY Farmingdale State College Flying Rams flew seven of their 22 college-owned aircraft in a fly-by, which was piloted by their top academic professional pilot performers. Also present were the American Airpower Museum Warbirds, aerobatic pilot Matt Chapman, Long Island’s own David Windmiller, and the world-famous GEICO Skytypers. The Skytypers, with a flight squadron of six vintage WWII planes, delighted attendees with over 20 different tactical maneuvers. The aircraft used by the Skytypers are rare, North American SNJ-2s that were originally built in 1940 and 1941 during World War II. The SNJ-2s have since been restored, specially equipped and modified for their sky-typing mission. 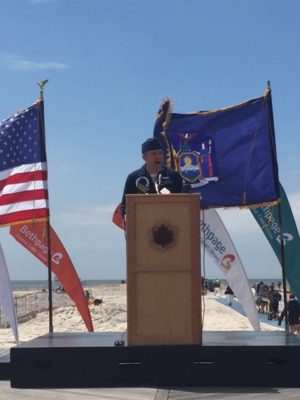 According to Jim Record, #7 pilot for the GEICO Skytypers who is able to both skytype and skywrite, “Each plane flies next to each other in abreast formation. We fly wingtip-to-wingtip, right next to each other. When we’re going to write a message, the lead pilot types the message into the lead computer. This signals each of our planes when to release a puff of smoke. It’s like a big text message.” Record smiled. “We were the first to text.”

It takes approximately two minutes to sky-type 25 letters, which is seventeen times faster than skywriting. This feature allows sky-typing to put out more messages at a higher rate of speed. “This is a very unique type of advertising that nobody else uses. We actually invented it,” Record noted. “We’ve been doing this for forty years. Each message can be read from 15 miles in any direction, because each letter is 1,000 feet high—that’s as high as the Empire State Building! We work at 10,000 feet, and the moment the steam hits the cold air, the puff of smoke appears.” The GEICO Skytypers perform in approximately 15 air shows yearly, and have also created messages for Yankee Stadium, Fenway Park, the Belmont Preakness, corporate sponsors, and even personal messages. “We just did a proposal message in Beauford, South Carolina. The girl was in the bathroom and missed the entire message. Luckily, we recorded it for her. She was thrilled.” The GEICO Skytypers wrote 15 proposals since the beginning of this year.

The Central Mall Boardwalk food court was open for business, as the aroma of grilled hot dogs mingled with the strong scent of salt and sand. Tents were set up along the boardwalk, which featured commemorative T-shirts of the event, food and beverages, and ground activities for families. The New York Islanders tent featured a slap shot for kids, as well as a wheel to spin for prizes. Just off the boardwalk, crews were ready to break ground for the upcoming “Boardwalk Café.”

The Bethpage Air Show at Jones Beach was sponsored this year by Bethpage Federal Credit Union, New York State Office of Parks, Recreation and Historic Preservation, Newsday, WABC-TV Channel 7, PSEG Long Island, Natural heritage Trust, Connoisseur Media Long Island and the New York Islanders. WHLI 1100 and 1370 AM broadcast the show. Although the weather was unseasonable, it was still thoroughly enjoyable beneath the thick layer of clouds and cool ocean breezes. Long Island’s yearly tradition was a perfect kick-off to the Memorial Day weekend, as well as an honorable tribute to the men and women who made the ultimate sacrifice for Long Islanders and Americans everywhere.