The girls soccer team finished the season with many accomplishments this year despite competing in the toughest conference in Nassau Class A. Twenty-three committed players worked to their potential competing against state-ranked teams. 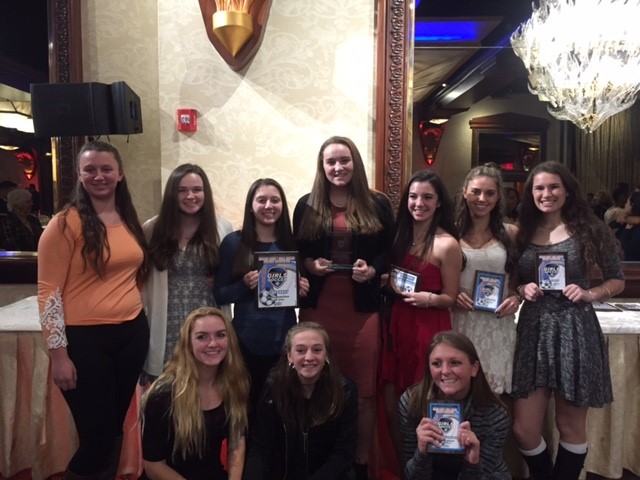 One highlight of the season was tying the first place team, Southside Cyclones. The girls worked exceptionally well as a cohesive unit while maintaining an even match against the Cyclones, who have won 26 state championships, finishing the game tied at 2. Another outstanding moment was defeating Cold Spring Harbor in a very aggressive, intense playoff game. Cold Spring Harbor put in the first goal thirteen minutes into the game. Olivia Christiano equalized with a shot from 25 yards out in the 34th minute. The game remained very tight and scoreless for the next 46 minutes, leading to overtime. In the 98th minute of the game, Jessica Petry sealed the deal finishing a corner distributed by Domenique Masi.

Despite switching to the main defensive position of sweeper, Petry was the team’s leading scorer, finishing with 7 goals and 2 assists. She excelled at taking the ball up the field when the opportunity was given and firing in powerful shots. Brenna Glover, sophomore, had a great season finishing with 4 goals and 4 assists. Kaeley Johnston finished an incredible season first in all of Nassau County with 167 saves. This outstanding accomplishment made it clear she would be the winner of the Howie Gould Award. The Howie Gould award offers scholarship money and a beautiful plaque to the best goalie in Nassau County.

The season came to a conclusion last night as several of the players were honored at the Nassau County Girls Soccer Coaches Association at Crest Hollow Country Club. All-conference honors were awarded to Brenna Glover and Quealy. Petry received all-class and Johnston received all-county honors. Masi was this year’s recipient of the scholar athlete award.

This year we will be graduating six seniors: Ashley Jones, Domenique Masi, Lizzie Mullin, Kellyann Jorgensen, Jessica Petry and Kaeley Johnston. Both Kaeley and Jessica will be continuing their soccer career at the collegiate level. Kaeley Johnston will be goaltending for the Citadel. Jess Petry will be a Panther next year, playing for Adelphi University. Congratulations to the whole team and best of luck to all of our outstanding senior athletes who always excel both on and off the field.