Under the direction of Lisa Levenberg and Carisa Wellenreuther, MacArthur High School’s talented cast and crew drew a packed house during three performances of the musical comedy The Addams Family, held in the auditorium on Nov. 17-19. After a successful preview matinee for senior citizens, the cast, crew and pit orchestra musicians entertained the audience with their rendition of author Charles Addams and Broadway’s tale of an unconventional family.

“There are no words to express how proud I am of all the work you put into making this show possible,” said Levenberg, thanking everyone who was involved with the musical production. 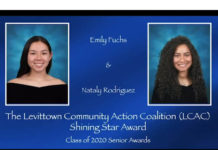