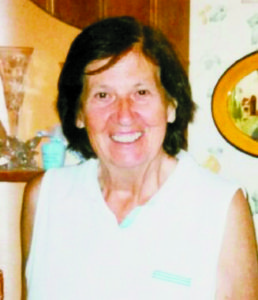 Betty LaRussa would not talk often about growing up in New York City during the Great Depression, but when she did, you knew that it was a difficult existence that included poverty, evictions, splitting up her family and a degree of desperation neither her children nor her grandchildren could imagine. That experience may also be one key to why for the rest of her 89-plus years she lived life to the fullest and focused on what matters most—not money or material things but family; giving rather than receiving; taking care of friends, relatives and strangers, and, of course, dancing.

Betty went to high school during World War II and married Salvatore LaRussa a few years after he returned from war. They lived in an apartment in Queens and had three children. Like many survivors of both the Depression and a world war, they wanted a better life for their children, so just like thousands of other GIs and their families, Betty and Sal scraped together enough money for a down payment and in 1959, bought a house in Levittown, a new suburb especially designed for such a migration. Money was very tight for a long time after that, but because Betty was who she was, her children never knew the difference. Vacations included camping and meals Betty prepared that were eaten on roadside picnic tables; dinners were stretched with extreme creativity; eating out was rare but Betty’s Sunday dinners put any restaurant to shame. And what the family did not have in money, Betty made up for by participating in every aspect of her children’s lives. She was always the “team mother’ for little league baseball teams; she never missed a sporting event. She did all of this while working as a crossing guard for the Nassau County Police Department.

Betty touched the lives of those beyond her family. She was a Girl Scout leader and took the older girls backpacking overnight in the Catskills. She also served her community as a volunteer at the local hospital and took part in school committees. She was always there for her friends, especially in time of illness or loss. As her children grew, her home became a meeting place for her children’s friends, who would eat the spaghetti and meatballs that seemed to always be in her refrigerator, sleep over night at the house or go “camping” in the LaRussa’s backyard. In fact, Betty had to be the best Polish-American cook of Italian food, having adopted her first-generation Italian-American husband’s ethnic cuisine. After the kids grew up and Betty and Sal had more money, they traveled extensively, including Alaska and all over Europe. In Sicily, Sal would talk Italian to his relatives while Betty enjoyed herself even though she had no idea what was being said. She also played a mean game of touch football at Thanksgiving dinner into her late 70s.

Family was the center of Betty’s life. She adored her father, John, and she cried when her first male grandson was named after him. She took her mother into her home after her father died and nursed her through breast cancer. Her grandchildren—Stephanie and the four boys—in turn adored Betty. Stephanie grew up close by and spent a lot of her youth with her grandparents, with whom she was very close. Her four grandsons lived in Maryland but remember as the high point of each summer spending a week in Levittown with their grandparents, eating spaghetti and meatballs and the best chocolate layer cake imaginable, having great barbecues in which Betty would inevitably complain about Sal’s cooking, and going to Jones beach. Not much out of character, at 80 years old, Betty joined her grandchildren on a carnival ride that flipped upside down.

Betty passed all of this along to her family, and when she was diagnosed with Alzheimer’s disease, she went to live with her daughter Lori, who nursed her each day until her death, as Lori had done for her father, insisting that her parents would never live anywhere but with family. Even up to the mid-stages of Alzheimer’s, Betty retained her love of life, and would dance in Lori’s living room just as she had danced the lindy with Sal countless times during their marriage. She didn’t waste one day of her 89 years on Earth, and because of that she will be sorely missed.

Friends visited at Barranco & Sons, P.A. Severna Park Funeral Home. A Mass of Christian Burial was held at St. John the Evangelist Church in Severna Park followed by interment at Maryland Veterans Cemetery Crownsville. In lieu of flowers, memorial contributions may be made to the Hospice of the Chesapeake’s, Chesapeake Life Center or to the Alzheimers Association. Online condolences may be made at www.barrancofuneralhome.com.