Levittown native is more than just one of the boys

Gabriella Farrell is unlike any young lady you’ve ever met. Growing up in Levittown, Farrell played sports for the Levittown Red Devils. When she grew bored of cheerleading at the age of 9, she found a new sport: football. Not many girls dream of running a football down the field, but for Farrell, it was more fun than anything else.

“Being a cheerleader for my brother’s football team, I remember always being so jealous of how much fun the boys had while I was on the sidelines cheering,” said Farrell. “Once I told my parents that I wanted to play football, my mom announced it to all of the team parents proudly. My dad became a coach my first year and made the transition from cheerleader to football player easier for me. He’s always been my number one supporter, just as much my mom since day one.” 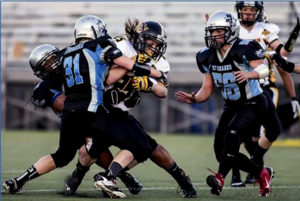 The now 19-year-old and her brother are only one year apart, so during her first year of football, they played on the same team, a welcome comfort for the new girl playing with the boys.

“He never treated me differently from our teammates, even when the other boys on my team treated me differently. My brother always went really hard on me during hitting drills because I was the smallest one on my team and a girl, so other boys would often take it easy on me,” said Farrell, adding that the boys were under the mentality that they couldn’t hit her because she was a girl. “It just made the struggle of being a girl and a football player a little harder, but that never stopped me.”

From a young age, Farrell knew that being a girl didn’t make her any less capable of being a football player than anyone else on her team, but knew she had to prove it so others could see for themselves that she was their equal.

“My brother definitely made me a better football player so I’ve always been grateful to have him on my team my first year,” she said. “Being able to take him down in practice meant I could take on one of the biggest guys on our team, and it proved size or gender didn’t make a difference if you want it bad enough.”

Although she was the smallest on the team, that also played to Farrell’s strength, making her the fastest, which aided her on the Red Devils until she aged out. In 2008, Farrell moved to Massapequa Park where she tried out and made the boys football team at Berner Middle School, but it wasn’t an easy road. 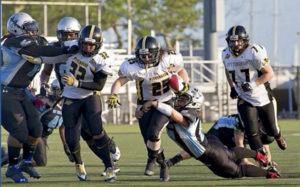 “Being raised in Levittown and growing up in that town, it was not only well-known but accepted, even respected, that I played football for many years. It was a huge part of who I was and my life,” said Farrell, who felt like an outcast for doing what she loved when she arrived in Massapequa. “It had been six years since a girl tried out for the boys’ football team in Massapequa and I had to wait a few days to get cleared by the board of education before even being allowed to try out.”

Farrell’s passion for her sport was met with questions by coaches and teammates, who inquired why she wanted to try out. It was the first time Farrell had to defend how important football was to her and how she didn’t know what she would do without it.

“I remember spending my 13th birthday sitting in the rain and watching the other boys try out, knowing that I had to prove myself all over again, to new people, new coaches, new teammates, in a new school that I could play football and had what it takes to make the team,” said Farrell, adding that it was more mentally than physically challenging for her. 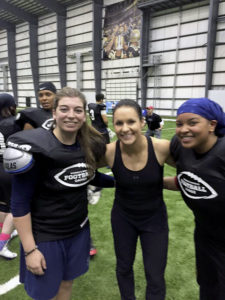 She eventually made Berner’s football team and was proud of herself for doing so, but said the rest of the season was very difficult for her.

Looking back on the experience, Farrell realizes that it was the most adversity she had ever faced and overcome.

“Most girls my age, younger, or even older than me thought it was awesome I played football growing up, even being the only girl on my team,” said Farrell. “Sometimes people would say they looked up to me, and adults would smile at me and say they wanted to be like me when they grew up, which I will never forget.”

After graduating, Farrell tried out and made the New York Sharks Professional Women’s Football team, under the Independent Women’s Football League (IWFL). In her first year, she was a First Team All Star for the 2015 Eastern All Star team (equivalent to an All Pro in the NFL), as well as Defensive MVP and Linebacker of the Year for the Sharks. She was invited to attend the 2016 World Women’s Tackle Football Games (WWTFG), held at the New Orleans Saints Training Facility. More than 200 women from around the world attended and were coached by NFL coaches for the week, including Dr. Jen Welter of the Arizona Cardinals, the first female coach in the NFL, who serves as Farrell’s role model. 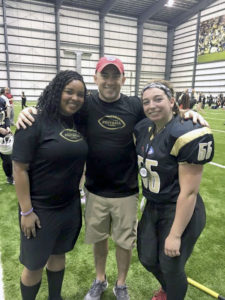 “She is an inspiration to me for paving the way, standing for and fighting for all women football players and every young girl, giving them the opportunity and fair chance to play football,” said Farrell of Welter. “She has proven that there is a future for us in this male-dominated sport; that women’s tackle football shouldn’t be kept secret anymore.”

For Farrell, playing in the WWTFG was the best experience of her life. She came home with new role models, new friends and a new perspective.

“I have never felt more touched by or been surrounded by so many amazing and positive people at once,” she said. “I got to compete with women that have been playing football for as long as I have, but were years older than me. It was amazing being able to compete with and be challenged by such talented women football players.” 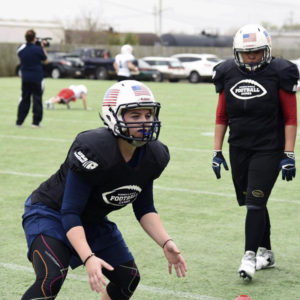 If you are a young girl in Farrell’s situation, she has a message for you.

“Don’t let anyone stop you, don’t listen to anyone that doesn’t believe you can…prove them wrong,” she said. “Set goals so big you have to grow into the person that can achieve them. Make being uncomfortable your comfort zone, because that’s how growth happens and how you reach your dreams.

Farrell is currently halfway through her second season with the Sharks with a record of 5-0. To see more of Farrell and her New York Sharks, visit www.nysharksfootball.com.