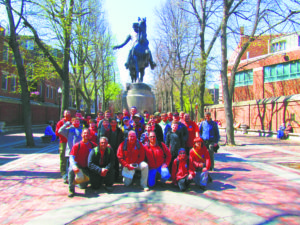 Recently, Wantagh’s Troop 96 ventured off to Boston and camped at Camp Sayre, also know as New England Base Camp. They started off with a visit to the Boston Museum of Science. While there, they saw an IMAX movie called National Parks Adventure and saw the various exhibits in the museum. Those exhibits included the Hall of Human Life, The Theater of Electricity, Frogs: A Chorus of Colors and many others.

The next day, they hit the Freedom Trail. They hiked from Boston Commons all the way to the USS Constitution, Old Ironsides. Along the way, they saw various burial grounds, the site of the Boston Massacre, Faneuil Hall, Paul Revere’s House, The Old North Church and the Bunker Hill Monument. While on Bunker Hill, there was a man dressed in period attire that explained what happened on Bunker Hill. He even shot off a gun to show them how the gun worked.

The boys all enjoyed lunch at Quincy Market. It was a fantastic, fun and educational trip.