LAC Firecrackers traveled to Audobon, PA on the weekend of July 18 to compete in the double elimination 10U Babe Ruth Softball Regionals. In the first game the Firecrackers played the Pennsylvania state Champs Luzerne County Chaos beating them 10-2, in the third inning with the Firecrackers leading 3-2 Luzerne had second and third with the cleanup hitter up, who hit a fly ball to right field where Firecracker outfielder Marissa (Red) Trezza made a diving catch saving two runs. The Firecrackers went on to win 10-2. Winning pitcher Samantha Petry struck out eight. The offense was led by Ashley Jones two hits, three runs scored and Justine Jean three hits and five RBIs.

Game two on Sunday the Firecrackers played Northern NJ Sparta Township winning 6-3 in a very hard fought game, with the score tied 2-2 in the bottom of the fifth inning Firecracker Shortstop Gabriella Scharff led off the inning with a walk moved to third on single by Alexis Haga, Now with the bases loaded Gabriella Denunzio lined a single to right scoring two runs. Isabella Schaetzles aggressive steal of home gave the Firecrackers an important insurance run.

Game three on Sunday had the Firecrackers playing Marlboro Heat, the winner advancing to Monday’s championship. In the top of the fifth inning the scored tied 1-1 Marboro had one out a runner on second base, Marboro number 4 batter hit a shot to centerfield where outfielder Bianca Marinelli made an outstanding catch to keep the score tied, then with two out runner still on second Firecracker third basemen Shannon Myles fielded a hard hit ball to her left and made a perfect throw to first to end the inning with the scored tied 1-1 in the bottom of the fifth inning Firecracker Red Trezza led off with a walk followed by a walk to Bianca Marinelli. With runners on first and third second baseman Ashley Jones laid down a perfect bunt for a hit, followed by a two-run single by shortstop Gabriella Scharff, putting the Firecrackers in the lead for good. The Firecrackers won the game 4-1 advancing to Monday’s championship Game. Firecracker winning pitcher Samantha Petry struck out nine and allowed only two hits,

On Monday the Firecrackers played the Washington Township Comets for the second time losing 8-1. The Firecrackers finished the tournament with a 4-2 record and finishing in second place.

Manager Jeff Jones, Coaches Anthony Valente, Diane Grieshaber and Mike Scharff couldn’t be more proud of these young ladies who played with heart and represented Metro NY/Long Island and their parents with class. 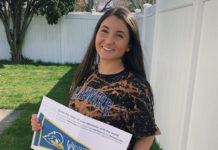 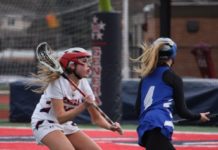 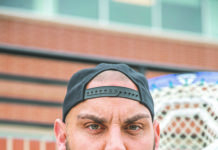